Is love written in the stars for the Cosmic Love contestants? That’s what Amazon Prime Video’s new show, which has been described as The Bachelor meets astrology, is trying to find out.

Cosmic Love is Amazon Prime Video’s new reality TV dating show that matches contestants based on their astrological compatibility. The series starts with four main contestants—also known as Elements—who represent the four elements in astrology: fire, earth, air, water. Each element—two men and two women—are matched with four singles from a pool of 16 contestants who are determined to be a perfect fit for them based on their zodiac signs.

The issue is the contestants don’t know who their astrological match is and who isn’t. Throughout the show, the elements also receive guidance from the Astro Chamber, an astrological expert who analyzes their sun, moon, rising and mercury signs to find out which contestants are the best matches for them. Just like astrology, love is complicated, as both the elements and singles find themselves straying away from their astrological charts and following their hearts. So is love written in stars? You’ll have to watch Cosmic Love to find out. But first meet the Cosmic Love contestants and see what their zodiac signs are.(For more about Cosmic Love, visit the Astro Twins’ website, where Ophira and Tali Edut give more behind-the-scenes details about the show.)

Read on to meet the Cosmic Love elements and singles and read Amazon Prime Video’s official descriptions of them. 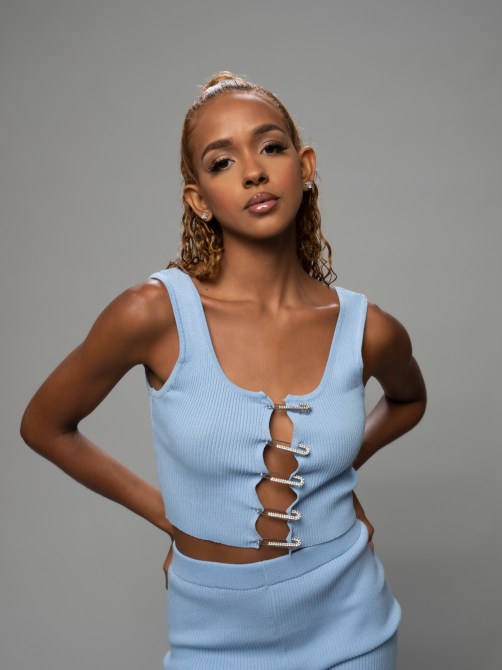 “Hardworking Capricorn Maria Rodriguez, 28, is the Earth Element on Cosmic Love. Raised by powerful women in New York City, beauty #boss Maria is a professional makeup artist who owns several successful businesses, including her own brand, M Beauty Party. Fiercely loyal to family and her Dominican and Puerto Rican roots, this savvy Sea Goat is not willing to settle. True to her zodiac sign’s take-charge style, Maria plans everything in her life to perfection. But can she surrender control to make room for a powerful plus-one?” 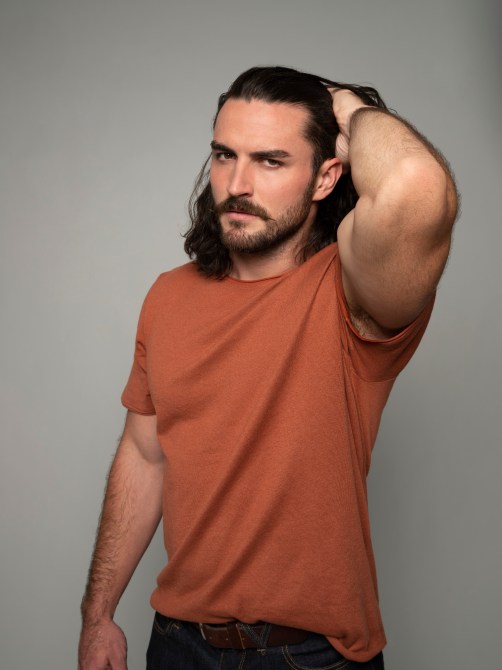 “Double the trouble or twice the fun? Gemini Connor Shennan, 27, represents the Air Element on Cosmic Love. True to his zodiac sign’s curious nature, Connor needs to weigh every option before making a (gulp) decision. Will this wildland firefighter find his ‘twin flame’ on Cosmic Love? Or will the winds of change send his attention in a new direction? A lover of music, sports and the great outdoors, Connor grew up in a close-knit Michigan family and currently lives in Phoenix.” 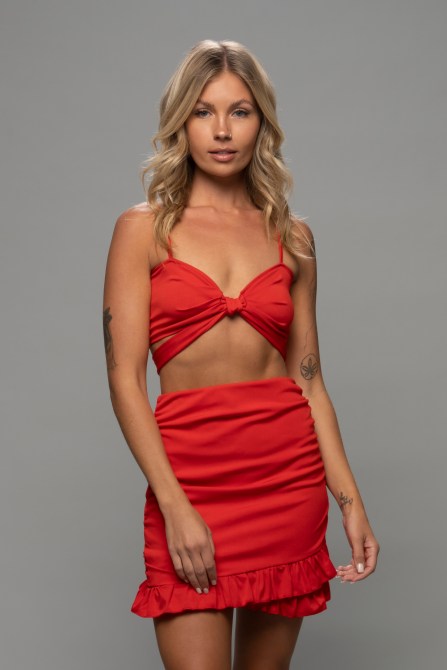 “It’s getting hot in here! Double Leo entrepreneur, model and fitness competitor Phoebe Davis, 28, is the consummate cosmic Lioness whose roar has scared off more than a couple of players. Now, as the Fire Element on Cosmic Love, this queen is ready to find her ‘mane’ man to claim the adjacent throne. A native of Spokane, Washington, Phoebe lives in San Diego, where she runs a marketing business and a personal brand, ‘Flexing Phoebs,’ inspiring women worldwide to love their bodies, overcome adversity, and embrace personal growth. Will Phoebe fall into the fire-sign trap of burning through her matches…or will she find someone who can keep the blazes lit for the long haul?” 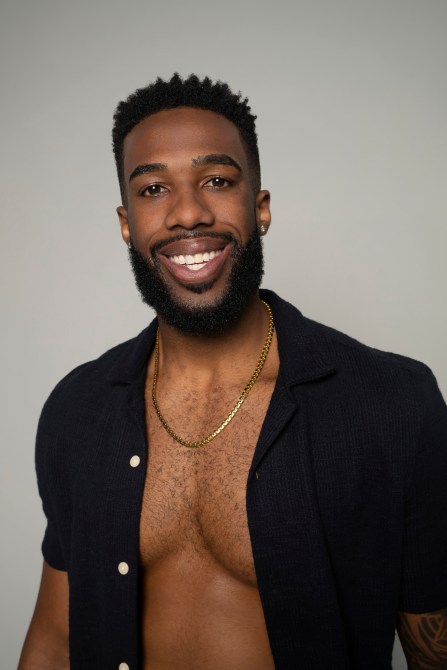 “Pisces Noel Allen, 31, is a personal trainer and nutrition coach tapped to be the Water Element on Cosmic Love. True to his artistic and caring zodiac sign, Noel is a romantic renaissance man who loves cooking, anime, working out, and supporting his clients as they transform their bodies and lives. Raised by a Cuban-American mom in New Jersey, Noel lives in Tampa, and hopes to create his own family. But here’s the (Fish) hook: Noel won’t water down his desire for both freedom and security, one of the many paradoxes of Pisces men that drive women crazy…and makes them fall crazy in love.” 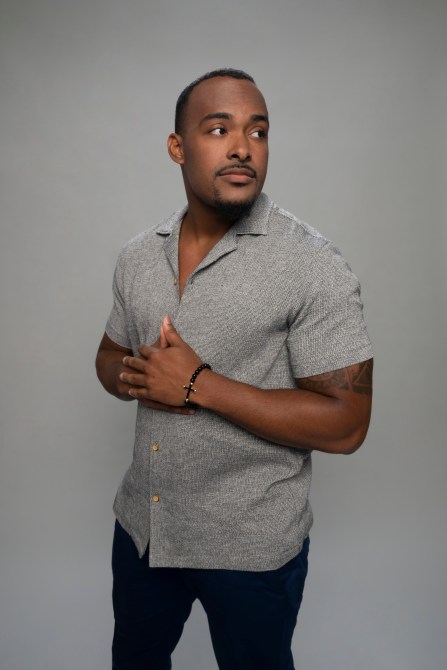 “Christopher Jones is a 29-year-old Sagittarius born and raised in Baltimore. He is currently attending law school at the University of Pennsylvania. His current interests include corporate law, fitness, and yoga.” 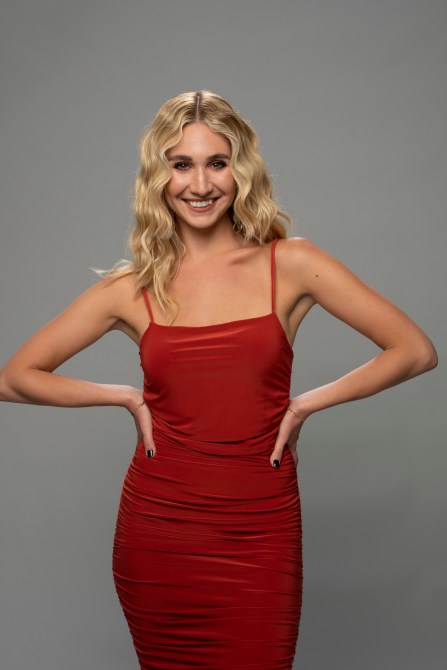 “Yana, 29, hails from Ukraine and lives in New York City, where she has a thriving career in the nightlife industry. A friendly and unique Aquarius, Yana is a world-traveled dancer whose parents were professional athletes. She is passionate about art and poetry, and feels her best ‘under the light of a disco ball.’” 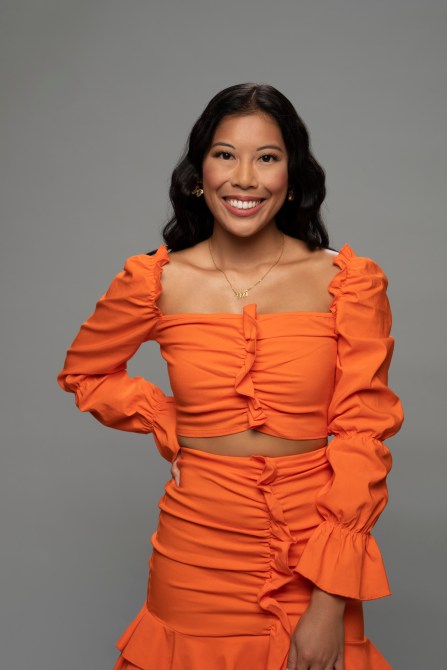 “Theresa is 30 years old and currently resides in her hometown of Nashville. She is a Scorpio who loves pop culture, personal development, and all things astrology. Theresa is a social media manager for locally based beauty and wellness brands. When she isn’t creating content for her clients, she loves travel, Pilates, and spending time with her family.” 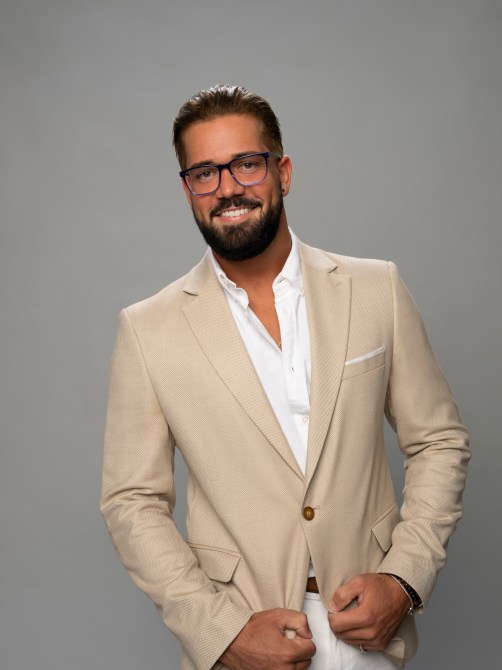 “Phillip Newhard, 29, is a New York City native and real estate investor who lives between NYC and Cape Cod. A consummate earth sign, this family oriented Capricorn loves nature, fishing, hiking, boating, kayaking, and all water sports. A foodie and world traveler, Phillip enjoys spirituality and mindfulness, and is involved in charities that give back to his community.” 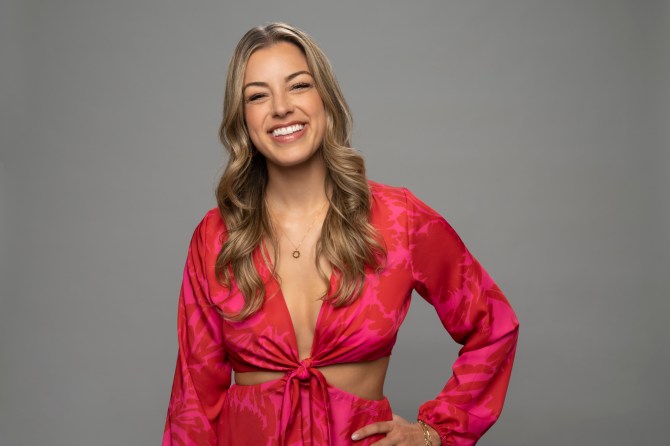 “Morgan, 29, embodies her Virgo star sign’s penchant for wellness, self-improvement, and “an epic skincare routine.” So much so that she’s incorporated all of these passions into her full-time business. Originally from New Jersey, Morgan now lives and works in Chicago. A self-described ‘hopeless romantic,’ she loves astrology, interior design, and creating the perfect playlist.” 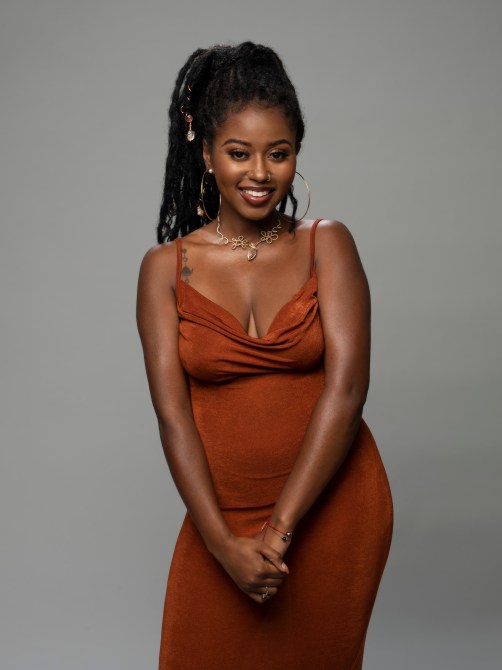 “Free-spirited Gemini Jazmin Potts, 27, was raised in New York and lives in Orlando, where she works as a talented stylist specializing in natural hair and makeup for her company Native Beauty. Jazmin embodies her sign’s flair for variety, with hobbies that include everything from roller-skating through nature paths to scouting the best sushi joint and ‘laughing at her own jokes.’” 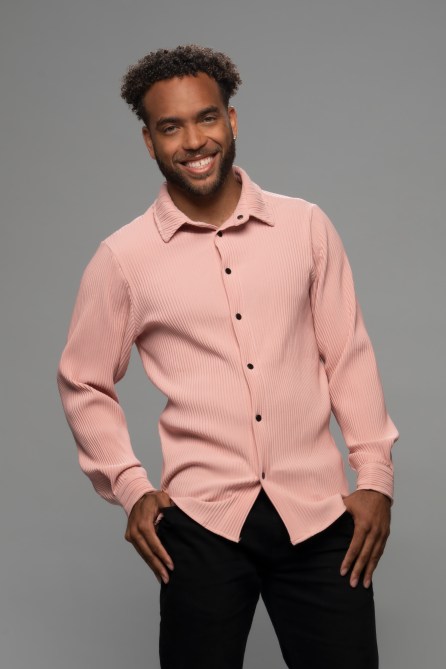 “Javier McIntosh is a 33-year-old film director thriving in Atlanta. He owns a video production company, McIntosh Bros Productions, and enjoys directing and producing commercials, music videos, and feature films. Javier is a Capricorn, so he has always been ambitious, hardworking, responsible, and persistent. He is hoping to put these traits to use and, with the help of the stars, find his true love.” 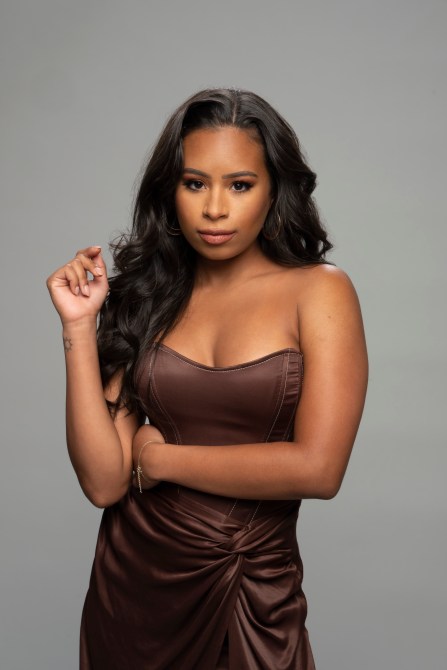 “Jasmine Rodulfo is a 24-year-old social media marketer who wears her Cancerian heart on her sleeve. Raised in the Bronx and now living in Dallas, Jasmine’s family roots are in the Caribbean. An avid traveler, she worked and competed in the pageant industry for 10 years.”

“Country music crooner Christopher J. Essex is a 26-year-old Pisces living in Nashville. A successful recording artist and performer, Christopher spent several years as a touring actor and musician in Broadway’s Million Dollar Quartet. While he stays busy writing, producing, and performing his own music, this Pisces charmer is also a dancer in the show Ranch Hands Cowboylesque, as well as an instructor for line dancing and country two-step.” 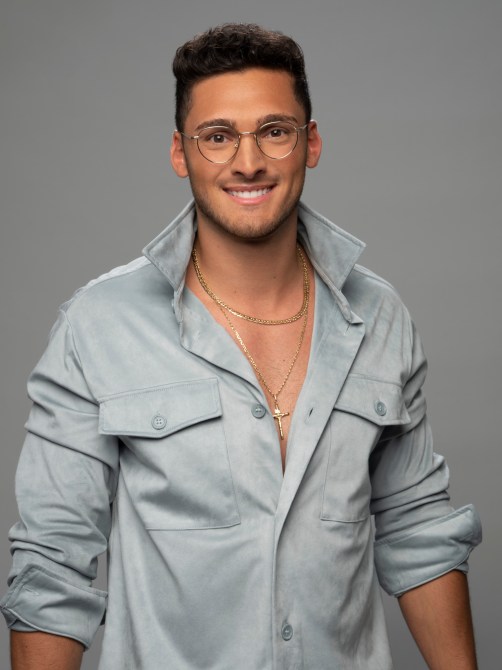 “Chris ‘Goose’ Ragusa is a 27-year-old engineer from Connecticut who currently resides in Florida. In his free time he enjoys living his best Leo life: going to the gym, playing and watching sports, and hanging out with friends. True to his celebratory sign, Chris has been crowned the life of the party. Most of Chris’ friends are married or engaged, and his tight-knit family would love to see him walk down the aisle, too.” 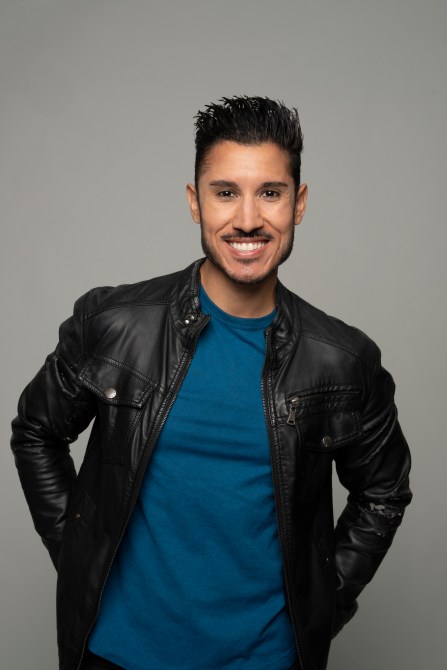 “David Christopher is a 34-year-old Aquarius from Los Angeles, and the CEO of his own streaming TV network. He is also a professional musician and fitness coach, and trains in MMA.” 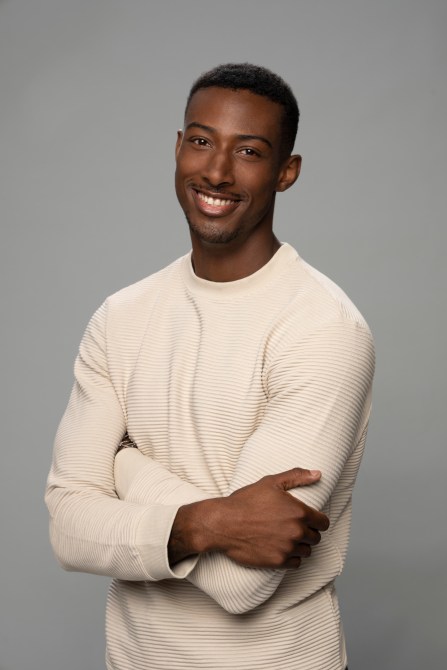 “Darren is a 26-year-old realtor from Houston, who embodies the mystery and intensity of his Scorpio star sign. When he’s not working, you can find him ‘taking long walks to his mother’s kitchen,’ hanging with his homies, or checking out new restaurants within the city.” 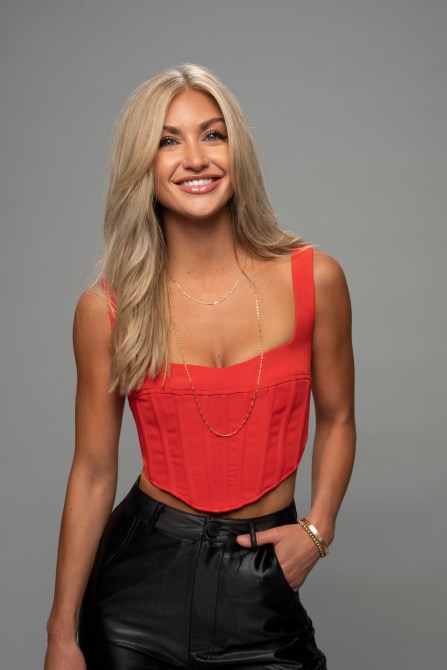 “Astrology aficianado Danae DeSpain, 32, is an adventurous Leo who was raised in beautiful Bend, Oregon, and now lives out of her suitcase as she travels the world. Obsessed with all things spiritual and self-care related (and her cavapoo Lily La Roux), Danae worked in social marketing and real estate. She’s currently focused on creating a cosmic-inspired lifestyle brand.” 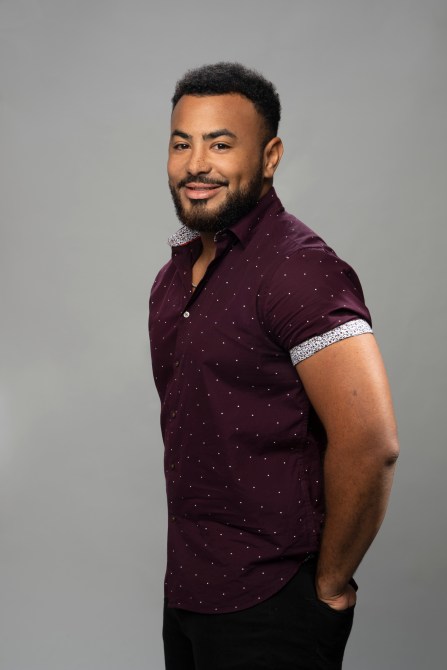 “Caleb McDonnell, 28, was raised in Ireland (cue the adorable accent!), and moved to the United States at age 21, settling in Delray Beach, Florida. Caleb works as a real estate agent there. His hobbies and interests include rugby, traveling, cooking, barbecuing, and (in true Pisces fashion) boating.” 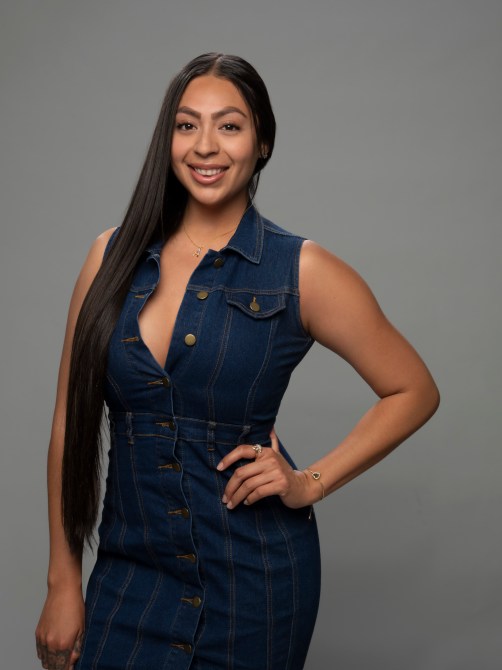 “Ana Miranda, 29, is a Pisces bartender and bottle service waitress from San Diego. A hopeless romantic and an adrenaline junkie, she embodies her zodiac sign’s heartfelt, supportive traits. She loves working in the hospitality industry and believes that love is ‘always worth taking a risk for.’” 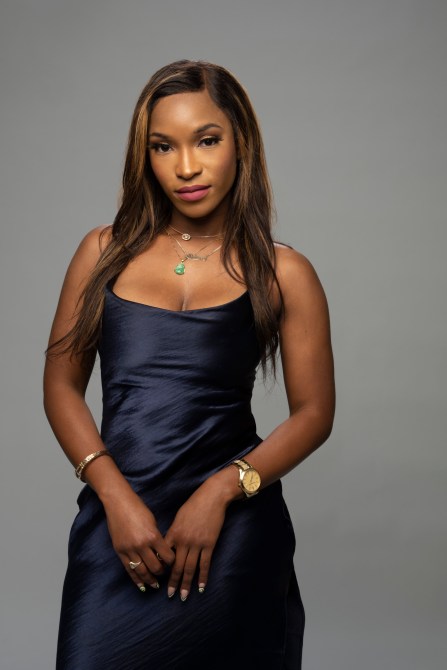 “Adrianna Raphaela, 25 is a molecular biologist, model, and actress from Boca Raton, Florida. True to her zodiac sign’s multihyphenate ways, she is the founder and CEO of Tres Angeles Swim, a unisex swimwear brand. Often described as the life of the party, this spicy Sagittarian can often be seen dancing or laughing. Adrianna enjoys water sports, traveling, playing Sims, and walking in the park with her dog Chloe.”

Cosmic Love is available to stream on Prime Video. Here’s how to watch it for free.

Scroll To See More Images After last week’s sleepy new moon in Libra, the energy will slowly but surely start...

A new turn of events? After they were spotted cuddling after Kim’s show at Milan Fashion Week, many Kardashian fans...

Incredible bond. Kanye West and Irina Shayk had a brief reunion at Milan Fashion Week. The two were spotted embracing...