Mark Tuan Interview: New Album ‘The Other Side’, Tour, GOT7

Mark Tuan
shines brightly. It’s not just his stunning smile, but his overall demeanor. It’s the release week of his first full-length English album, The Other Side, and Tuan could not be more excited to share it with the world.

In 2010, Tuan was scouted by South Korean entertainment company, JYP Entertainment, successfully auditioned and moved from Los Angeles to Seoul with the dream of becoming a K-pop idol. He debuted in the superstar boy group GOT7 with fellow members: Jay B, Jackson Wang, Jinyoung, Youngjae, BamBam and Yugyeom. They exploded into stardom and through ups and downs, their fans, better known as Ahgases, have been with them through everything. The group left JYP Entertainment in 2021 after their contracts expired and they decided not to renew.

The Other Side is a culmination of all Tuan’s experiences and feelings while being in the spotlight. After he left GOT7, he came back to his hometown in L.A. and started working on his album immediately. “I went into the studio without knowing what exactly I wanted to write about. Then I was like, ‘You know what? Let’s just write about how I felt back then,” Tuan tells StyleCaster. What came out of it was a perfect 20-track debut album that levels out his feelings and captures the density of fame and love.

Tuan doesn’t miss a beat when giving back to his fans. Throughout the course of his career, he has been so grateful for supporters, who have even adopted a ramen-tteokbokki dish in honor of him called the “Mark Meal.” The music video for his 2022 single, “imysm,” features him singing the heart-wrenching song in front of a sea of his fans holding their GOT7 lightsticks (affectionately called Ahgabongs) at a fanmeeting in Thailand. Recently, Tuan collaborated with Spark Aligners, a clear, teeth-aligning system, to enhance his smile and give away similar treatments to fans. Spark Aligners are clear teeth aligners made from TruGEN, a material that makes the aligners more comfortable, clearer and less likely to stain than other similar products. Tuan gave away Spark Aligner treatments to fans who followed him on social media and were qualified by a licensed orthodontist in July 2022.

“I was lucky enough to be reached out [to by Spark Aligners], and I went and talked to an orthodontist,” Tuan said. “He said, ‘You have pretty nice teeth,’ because I had braces before. Then they said I can go into treatment and broaden my smile. It made my smile much more full. I’m almost done with my treatment. I have three or four weeks left, and I’m done. We also talked about giving away Spark Aligners to my fans. I felt like it would be cool to just give back to fans to do what they want to do to fix their smile and have a better smile.”

After being in the studio and writing the first four songs, we said, ‘Why don’t we just make this into an album?’ We could make this into a whole entire story of everything I went through the past 10 years while I was in Korea.

As for what’s next, Tuan is absolutely thrilled to meet and perform in front of fans during his The Other Side Tour, which Tuan promises will be much “different” than his performances with GOT7. The tour kicks off in San Antonio, Texas, on October 3 and ends in Tuan’s hometown of L.A. on November 7.

Read down below about what Tuan looks forward to during his tour, his food recommendations, and his favorite memory with GOT7.

Our mission at STYLECASTER is to bring style to the people, and we only feature products we think you’ll love as much as we do. Spark Aligners is a STYLECASTER sponsor, however, all products in this article were independently selected by our editors. Please note that if you purchase something by clicking on a link within this story, we may receive a small commission of the sale.

On working on his debut album The Other Side

“I started working on the album last year in March. It’s been a year and I’m super excited to finally get it out and to have everybody listen to it. The creative process behind it was pretty smooth. After being in the studio and writing the first four songs, we said, ‘Why don’t we just make this into an album?’ We could make this into a whole entire story of everything I went through the past 10 years while I was in Korea. From there, I would make a list of topics I wanted to talk about, and the timeline is consistent with it. The album starts with me leaving L.A., going to Korea trying to find myself, getting into music for me, what I love to do now, and then coming back.”

On how he gets over writer’s block

“I really only go into the studio when I’m in the mood. I usually just go in when there’s something I want to talk about or something I want to write. I get writer’s block when I can’t think of certain things I want to say, but I just don’t know what I wanna hold on to write it. For me, I’ll say that we’ll call it a day, we’ll come back some other day and finish the song, or you just take a break from it. I feel like putting so much thought into one thing and if your head isn’t in the right space, and it isn’t clear, you might not get the best results. I like to take a break, then come back to it, and I feel a little bit better.”

On his favorite memories with GOT7

“When we first became a group and when we first debuted is a big memory for me. Just a lot of the time that’d be spent on stage with the fans, our first concert or just us goofing off in our practice rooms. Those types of memories really came back to me when I was in the process of writing lyrics and writing songs. We just always had a good time together. There are times when we definitely argued or just had bad times. But at the end of the day, it built us to who we are right now.” 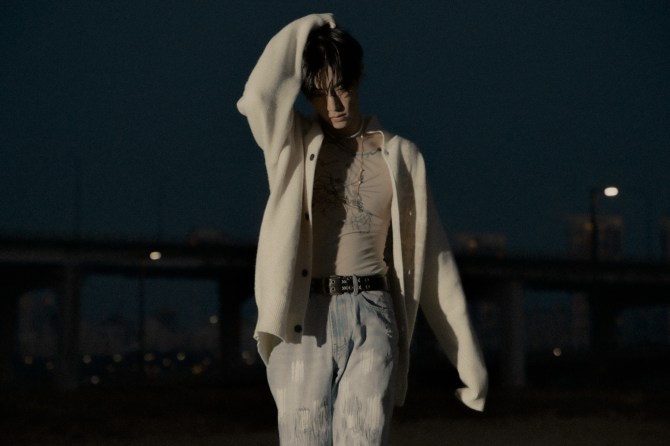 On what he’s looking forward to on his tour

“It’s gonna be a lot different than touring with GOT7. For those concerts, we split up some parts with the members and whatnot. I don’t know how long my show is going to be, maybe an hour and a half. I gotta perform by myself from beginning to end. I’m going to have a band member on the stage too, and I’m going to incorporate some dances for the shows. I don’t know if the fans are going to enjoy it because it’s much different than what GOT7 used to do. We used to just dance from beginning to end. But, I hope they enjoy and have a good time.”

On connecting with his fans

“It’s pretty important to update fans on what you’re doing and your daily life. But I really suck at that because I don’t take photos and I don’t really have much to show them. So I try to show them whatever I can. My team has been pushing me to do more TikTok. So, we have a couple of videos on that, and I use my social media platform to go live and talk to the fans. I’ll have an hour session where I’ll just chat with them on Twitter. I do want to update more on my life, but sometimes it’s really pouring in. I don’t think they would want to see me playing golf. I don’t really take pictures, but it’s so important to stay connected with your fans.”

On experimenting with new fashion trends

“I’m always open to trying new different types of trends. Painting my nails was something new that I started last year. I don’t know what the current trends are. Usually, I’ll do a magazine photo shoot, and they’ll have me try something new. And then I’ll realize, ‘Oh, no. I liked this kind of style, or I enjoyed doing this.’ Then I gravitate towards it a little bit and I’ll incorporate it into my wardrobe. But right now, there’s nothing new. I’ve been looking around for [new trends] because I’m going on tour in October. I’m trying to look around to see what would be cool for the stage outfits. I’m going to have a stylist with me to prepare the wardrobe. But on tours, it’s just gonna be me.”

“I haven’t been eating any food combos recently. I can’t think of anything because the [Mark Meal] was something that one of my fans made. I usually just go in for a Slurpee at 7-Eleven. I get my cherry Cokes: 3/4 Coke and then ¼ cherry. That’s my go-to drink. I go there about three or four times a week just to get a Slurpee.”

The Other Side by Mark Tuan is available on Amazon
.