J.P. Morgan Says Now Could Be a Good Time to Buy Cybersecurity Stocks; Here Are 2 Names With Promising Growth Potential

As the Federal Reserve hastily withdraws the powerful tide of easy money that kept the U.S. economy buoyant through the worst of Covid, the deepening bear market for the S&P 500 and other stock indexes is revealing, as Warren Buffett famously said, “who’s been swimming naked.”


The Fed’s fastest rate-hiking since the early 1980s and unprecedented pace of balance-sheet tightening has been wrenching for U.S. investors. But the sudden dearth of liquidity is wreaking even greater havoc via international currency markets.

With global recession looming and Vladimir Putin threatening to resort to nukes, investors are finding safety in the highest U.S. Treasury yields in 13 years. The endless flow of cheap dollars, which whetted risk appetites and afforded low borrowing costs around the globe since the 2008 financial crisis, is now rushing back to the U.S., pushing the greenback to 20-year highs. That’s exacerbating inflation outside the U.S., forcing most central banks to follow the Fed’s lead to protect their own currencies and making their economies even sicker in the process.

Though evidence of financial fragility is growing, Fed policymakers seem determined to continue their interest rate-hike sprint until something actually breaks.

When the Fed’s need to tighten to meet its domestic inflation mandate creates problems for the rest of the world, markets can quickly come unglued. That happened in early 2016 and late 2018. In both cases, the Federal Reserve quickly pivoted away from its tightening plans.

Speculation is rising on Wall Street that the Fed could again turn dovish earlier than expected, partly because of the global reverberations.

Yet in an Oct. 6 appearance, Federal Reserve Gov. Christopher Waller sought to assure markets that this time will be different.

“I’ve read some speculation recently that financial stability concerns could possibly lead the FOMC to slow rate increases or halt them earlier than expected,” Waller said. “Let me be clear that this is not something I’m considering or believe to be a very likely development.”

Inflation Too Hot For Fed, But Stocks Roar Back

Yet even within the Fed, divisions have arisen.

In an Oct. 10 speech, Fed Vice Chair Lael Brainard said the combined force of rapid rate hikes by the Federal Reserve and other major global central banks is “more than the sum of its parts.” She cited negative “spillovers” from higher interest rates, a stronger dollar and weaker demand from trade partners.

Brainard is among the lonesome doves. Minutes from the Sept. 21 Fed meeting released on Wednesday noted that “several” committee members preferred “to calibrate the pace of further policy tightening.” Yet “many participants” argued that “the cost of taking too little action” outweighed the risk of not tightening enough.

Waller argued that the Federal Reserve has “tools in place to address any financial stability concerns.” That includes a standing repurchase agreement facility to support foreign monetary authorities.

Brainard is more circumspect. “A sharp decrease in risk sentiment or other risk event that may be difficult to anticipate could be amplified, especially given fragile liquidity in core financial markets,” she said.

Japan, whose central bank has been among the few holdouts in the global rate-hike campaign, seems overmatched as its government intervenes to try to stem the yen’s decline. On Tuesday, the yen dived to a new 24-year low vs. the dollar, down about 27% in 2022.

The U.S. dollar index, which tracks the greenback vs. a basket of advanced-economy currencies, is up just over 20% from a year ago. The moves against a range of emerging market currencies have been even more dramatic. After the dollar’s value doubled vs. the Turkish lira over the past year, Turkey is wrestling with 80% inflation. 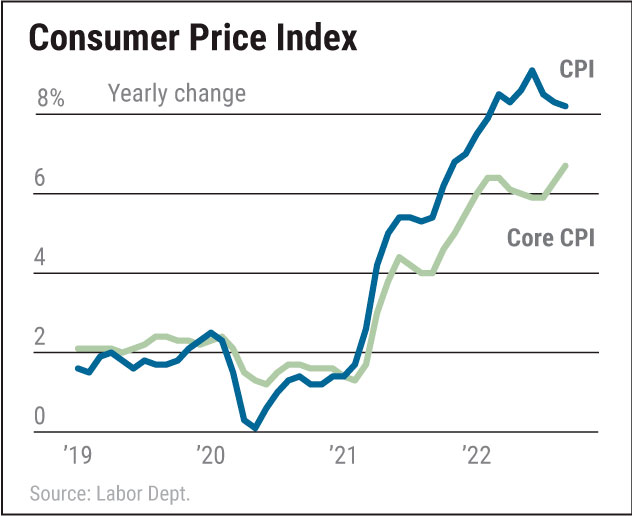 Ruchir Sharma, chairman of Rockefeller International, focused on emerging market investing in a recent Financial Times column, explaining that a strong dollar can only help at the margins to lower U.S. inflation. Imports are a fairly minor share of U.S. consumption, he noted. Also, a substantial share of those imports, such as oil, are priced in dollars.

Inflation is the biggest immediate concern as the strong dollar compounds the hit from high food and energy prices that took off after Russia invaded Ukraine.

Central banks have tried to keep pace with the Federal Reserve to combat inflation and shore up their currencies. Yet each successive rate hike is getting harder to swallow as their economies weaken. That led Australia’s central bank to back off plans for another half-point interest rate increase earlier this month, limiting the increase to a quarter point.

“Rising global borrowing costs are heightening the risk of financial stress among the many emerging market and developing economies that over the past decade have accumulated debt at the fastest pace in more than half a century,” according to a World Bank policy note in September.

The Federal Reserve is sometimes regarded as the world’s central bank. That’s partly because the dollar is the world’s reserve currency and key commodities such as oil are priced in dollars. But that doesn’t mean the rest of the world is happy about it.

A report from the United Nations Conference on Trade and Development this month warned of “global recession and prolonged stagnation” that disproportionately hits poorer countries “unless we quickly change the current policy course of monetary and fiscal tightening in advanced economies.”

Marko Papic, chief strategist at the Clocktower Group, argues in a new report that peak Fed hawkishness, by intensifying Europe’s inflation woes, threatens to undermine a united front toward Russia and “other energy-producing pariah states.”

The U.S. “needs to throw the rest of the world a lifeline and adjusting its monetary policy may be the only way to do it,” he wrote.

Papic expects a Fed pivot soon amid slowing U.S. growth, a housing collapse and “bond market carnage.” The most likely shift may involve a softening of its quantitative tightening program, Papic says. The stepped-up pace of QT now has the Fed shrinking its portfolio of Treasurys and mortgage securities by up to $95 billion per month.

Thursday’s surprisingly hot September CPI data seemed to push a Fed pivot even further out. CME Group’s FedWatch tool now finds futures markets pricing in strong odds that the Fed will hike its key interest rate to a range of 4.75%-5% in early 2023 (up from 3%-3.25% now).

What Will The Fed Break First?

Yet a Federal Reserve pause — though not a Fed pivot to actual rate-cutting — may happen sooner than expected. That’s because breakneck Fed tightening may cause too much breakage in global financial markets or the U.S. job market before officials can tighten as much as planned. 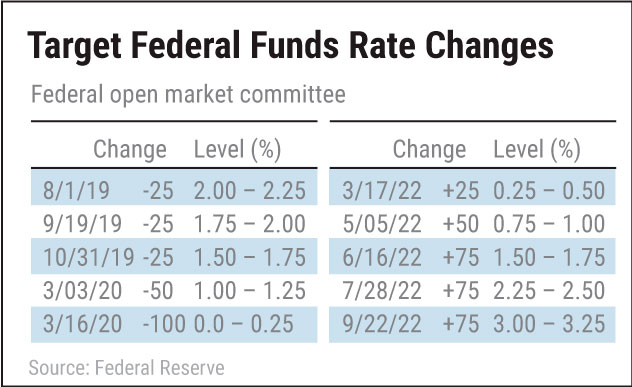 “The freezing of liquidity in many sovereign bond markets is demonstrating that the ‘global plumbing’ system is already becoming blocked,” producing extreme volatility. “Investors should expect further nonlinear price action.”

Meanwhile, Darby said the U.S. economy “should be sharply slowing,” with U.S. financial conditions at their tightest in 20 years. And there’s evidence that it is. The Institute for Supply Management manufacturing survey’s forward-looking new orders index points to the sharpest contraction since May 2020. The weakness centered on housing is spreading and is beginning to infect the labor market. Job openings, though still too high for the Fed, tumbled by 1.1 million in August, about 10%.

The Fed’s strategic shift that chair Jerome Powell unveiled at Jackson Hole Aug. 26 is paying off. That’s when Powell ditched his earlier optimism that the U.S. economy could skirt recession. Instead, he signaled that the Fed will keep policy tighter for longer, grounding the economy so that the current inflation outbreak doesn’t turn into a chronic 1970s-style disaster.

Powell’s terse speech began a market repricing of the Fed policy outlook, reversing a rally that had seen the S&P 500 recover to where it was in mid-March. Meanwhile, the 10-year Treasury yield retreated close to 2.5% and the 30-year fixed-rate mortgage to 5%.

A summer rally fueled by expectations for a Fed U-turn to rate cuts in 2023 mostly reversed the tighter financial conditions from months of rate hikes. That allowed the job market to tighten further and service-sector inflation to accelerate.

The Fed’s new strategy has simply been to replace hope with extreme and unwavering hawkishness. And so far it has worked. The 10-year Treasury yield has surged to 4% and the 30-year fixed mortgage to 7%.

But the Fed’s all-out sprint to tighten policy comes with high risk to financial stability — and not just for the rest of the world — Natixis CIB Americas economist Troy Ludtka told IBD.

After an era of mostly near-zero interest rates, the Fed’s historic aggressive tightening is like “going from 100 mph into a brick wall.”

Risky lending outside the banking sector and a large universe of zombie companies are headed for a crackup, he says.

“The Fed needs to signal a 2023 pause to see how conditions evolve and also commit to remaining nimble in the face of immense macroeconomic uncertainty.”

Catch The Next Big Winning Stock With MarketSmith

J.P. Morgan Says Now Could Be a Good Time to Buy Cybersecurity Stocks; Here Are 2 Names With Promising Growth Potential

In today’s digital world, there will always be a need for cybersecurity. Too many of our essential systems, everything from...

Drugmaker Pfizer (PFE) will see out the most lucrative year in its history with fourth-quarter results due early Tuesday and...

Lucid (LCID) shares soared as much as 88% on Friday and were repeatedly halted for volatility following speculation that Saudi...

Lucid stock was soaring Friday, a move that is being attributed to unconfirmed rumors that the company could be acquired....