How to Watch ‘Below Deck Adventure’ Live Online Free: Where to Stream

All aboard! If you love Captain Lee, Sandy and Glen, you may want to know how to watch Below Deck Adventure live online to see the newest captain and yachties from the Below Deck franchise.

What makes Below Deck Adventure different than other Below Deck shows are the thrilling activities the guests take part of, which are often physically demanding for its crew. Season 1 of Below Deck Adventure followed charter guests in the glacial fjords of Norway as they took part in activities like sledding, heli skiing, cold-water plunging, and fishing in the Scandinavian waters.

“It’s a totally different set of customers and guests,” Captain Kerry Titheradge told Entertainment Weekly in 2022. “The Caribbean, there’s a lot of beach parties and often people are enjoying inside of the boat, ’cause it’s so damn hot. In the Mediterranean, it’s all about pulling up at San Tropez and being seen.” He continued, We went biking down Trollstigen road, this road that has dozens of hairpin turns. They went paragliding, horseback riding. We got classy and did a fashion show in the caves.”

When does Below Deck Adventure air?

How to watch Below Deck Adventure live online

Read on for step-by-step instructions on how to sign up for Sling TV to watch Below Deck Adventure live online.

Who’s in the Below Deck Adventure cast? 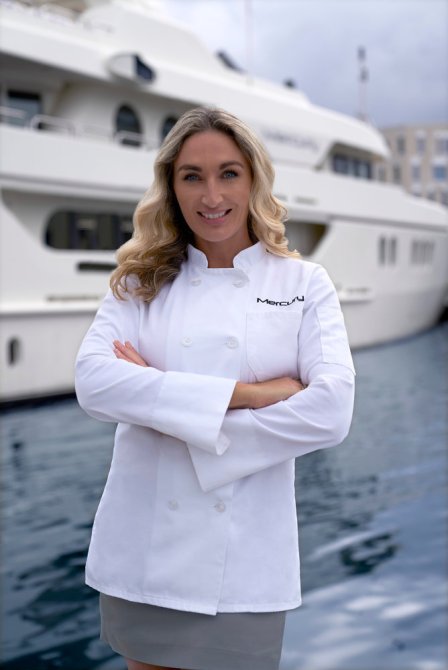 This $11 Primer From Amazon Boosts Volume & Thickness on Sparse Lashes

Among the charter guests for season 1 of Below Deck Adventure was The Real Housewives of Salt Lake City cast member Heather Gay. She was joined by Friend of Angie Harrington. Captain Kerry Titheradge—who appeared at Bravo Con 2022 with Below Deck captains Lee Rosbach, Sandy Yawn, Glenn Shephard and Jason Chambers—teased to Entertainment Weekly in October 2022 about Heather’s time on Below Deck Adventure. “The energy that she brought was absolutely incredible,” Captain Kerry said. “The most amazing place that we went the whole time was where their adventure was, Geiranger. You’ve got this waterfall behind the town and it kind of splits the town in two. It’s like Disneyland for adults.” He also hinted at drama between the superyacht crew at the start of the season  “kind of started the show off with a bang.”

Heather also teased her guest appearance on Below Deck Adventure in an Instagram post in September 2022. All the feels! Norway has my heart ♥️ Celebrating the best kind of friendships on @bravotv and @belowdeckbravo starting November 1st 🛥🇳🇴” she captioned a slideshow of photos and videos. She also retweeted the trailer at the time with the caption, “What an adventure!!! 🇳🇴❤️”

In an interview with The Dipp in 2022, Below Deck executive producer Nadine Rajabi, who created Below Deck, Below Deck Mediterranean, Below Deck Down Under and Below Deck Adventure, revealed what an average day is like filming the franchise. “We are actually on the boat and we have a 24-hours-a-day shoot schedule. We split the team up in 12-hour shifts, morning and night shifts, so we have access to the cast at all times. When you’re not on shift, you take the water taxi back to the production crew’s hotel nearby, where we exchange notes with those on the other shift, to make sure nothing falls through the cracks,” she said. “We are very lucky to be on this crew and get to experience this type of travel, but this workplace is nothing but mundane, since you really live and sleep all in the same place… most of the time in a tiny, little control room on the boat.”

Below Deck Adventure airs on Tuesdays at 9 p.m. ET/PT and 8 p.m. CT on Bravo. Shop our Bravo gift guide here.

This $11 Primer From Amazon Boosts Volume & Thickness on Sparse Lashes

There are few things you can do to fix lashes that have lost their lift after wearing mascara all day....

A Big Tesla Stock Sale Is Coming. We Don't Know How Big.