Where Is Nancy Salzman Now? Is She in Jail After NXIVM, ‘The Vow’?

In October 2021, Keith Raniere was sentenced to 120 years in prison for his role in leading NXIVM (pronounced Nex-ee-um), the cultlike group and multi-level marketing scheme in which female “slaves” were branded with his initials and coerced into having sex with him. Nancy Salzman was the co-founder and president of the group, devising its Executive Success Programs (ESPs) as it masqueraded as a self-help organization. Raniere received the brunt of the punishment and as HBO’s riveting documentary series The Vow returns for The Vow: Part II many are wondering where Nancy Salzman is now.

Salzman is a former psychiatric nurse who specialized in a pseudoscientific therapy called neurolinguistic programming when she met Raniere in 1997. Together, they founded a “human potential school” and developed courses “designed to assist individuals with achieving their life goals” according to a court filing. The trailer for Part II begins with footage from an NXIVM orientation video in which Salzman introduced herself as the “president of NXIVM Corporation and Executive Success Programs.” She then asks rather ominously, “What would happen if each of my secrets came out? The upside of letting go of your secrets is that you will have a lot more freedom,” she continues as footage of the NXIVM trial and newspaper clippings of her guilt are splashed across the screen. Footage from the documentary then shows her taking a seat as if to prepare for an interview with The Vow: Part II filmmakers to reflect on her role in NXIVM and her relationship with Raniere. So where is Nancy Salzman now?

RELATED: Click Here For the Best New Binge-Worthy Shows You Haven’t Seen—But Should

Where is Nancy Salzman now?

Where is Nancy Salzman now? The co-founder of NXIVM was sentenced to three-and-a-half years in prison on September 8, 2021, and was fined $15,000. She pleaded guilty to one count of racketeering conspiracy for her role in Keith Raniere’s depraved operation. She developed the curriculum for NXIVM’s Executive Success Programs in 1998 and was referred to as a “Prefect” while Raniere was known as “Vanguard” to group members. “Serving as Raniere’s right hand for more than a decade, Nancy Salzman’s conduct supported NXIVM’s objectives to recruit victims, stave off critics and alter evidence connected to a federal lawsuit. Today’s sentence does little to erase the suffering of NXIVM’s victims, but it serves as another reminder of the government’s commitment to seeing this case through to the end,” stated FBI Assistant Director-in-Charge Driscoll.

She also admitted to stealing the email addresses and passwords of NXVIM critics. In February 2022, Salzman reported to federal prison to begin her 42-month sentence. She is an inmate at Hazelton FCI, a medium-security women’s facility in West Virginia. According to the inmate registry, Salzman’s release date is December 4, 2024. In HBO’s The Vow: Part II, Salzman continues to believe there was some good that came out of NXIVM. “Imagine you spent 22 years trying to build something,” she says in a voiceover in the trailer, “and everybody thinks it’s the devil’s work… 17,000 people got good results. Where are they?”

What did Nancy Salzman do?

Nancy Salzman and Keith Raniere founded NXIVM in 1998 as a “self-help” organization in Albany, NY. At its peak, 18,000 people enrolled in the group’s “Executive Success Programs” (ESP) and workshops, which promised to free participants from their insecurities and negative emotions. They could cost as much as $7,500. Members included accomplished executives, Hollywood stars, wealthy heirs and the children of political dynasties. While most people only participated in a few classes, some members became ardent followers of Raniere, whom they called “Vanguard” and deemed him the most ethical man in the world. Salzman was referred to as “Prefect”. NXIVM’s 12-Point Mission Statement included mantras like “There are no ultimate victims; therefore, I will not choose to be a victim” and “Part of the condition of being accepted into ESP is to keep all its information confidential. If I violate this, I am breaking a promise and breaching my contract, but more importantly, I am compromising my inner honesty and integrity.”

Claims against the group’s abuse can be dated all the way back to 2003, but it wasn’t until 2017 that several former members asked New York State authorities to investigate NXIVM. Complaints focused on a secretive subgroup known as The Vow or DOS—a Latin phrase that roughly translates to “master of obedient females”—which was a scheme to provide Raniere with a continuous flow of submissive women. Ex-members detailed being branded and coerced into having sex with Raniere. The New York Times ran a report on the branding in 2017. “Submission and obedience would be used as tools to achieve those goals, several women said. The sisterhood would comprise circles, each led by a ‘master’ who would recruit six ‘slaves,’ according to two women. In time, they would recruit slaves of their own,” the article by Barry Meier, published in October 2017, read while detailing what the branding “ceremony” entailed. “Each woman was told to undress and lie on a massage table, while three others restrained her legs and shoulders. According to one of them, their ‘master,’ a top NXIVM official named Lauren Salzman, instructed them to say: ‘Master, please brand me, it would be an honor’. A female doctor proceeded to use a cauterizing device to sear a two-inch-square symbol below each woman’s hip, a procedure that took 20 to 30 minutes. For hours, muffled screams and the smell of burning tissue filled the room.” Shortly after, a criminal investigation began and a year later, Raniere was charged and arrested in Mexico where he had been living for five months with several women from NXIVM. 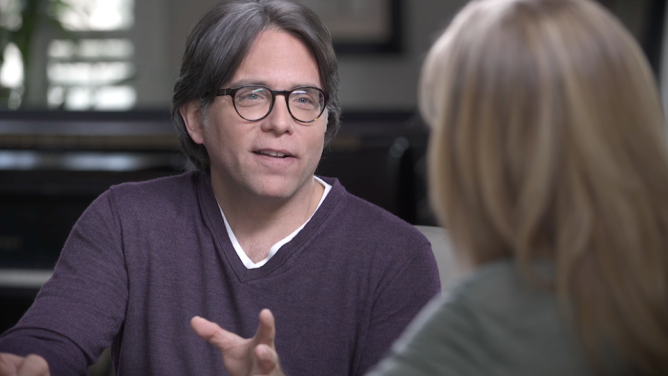 “I want you to know I am pleading guilty because I am, in fact, guilty,” Salzman told the judge in 2019 upon her guilty plea. “I accept that some of the things I did were not just wrong, but sometimes criminal. I justified them by saying that what we were doing was for the greater good. I am deeply sorry for the trouble I caused my daughter, the pain I caused my parents. … I still believe that some of what we did was good,” per the New York Post. Later that month, Salzman’s daughter Lauren, who taught some of the group’s workshops, pleaded guilty to racketeering and racketeering conspiracy.

But survivors of the group believe Salzman was a vital cog in its operation. “I don’t think NXIVM could have existed without Nancy Salzman,” Alejandro Betancourt, a member of NXIVM’s executive board for nine years, said in an interview, per the New York Times. “Nancy was Keith’s enabler.” Raniere received a 120-year prison sentence for sex trafficking and other crimes. He was also ordered to pay a $1.75 million fine and is serving out his sentence at U.S. Penitentiary Tucson in Arizona. In September 2022, Raniere was attacked by a fellow inmate and sex offender. He suffered a black eye, swelling, nausea and dizziness for more than a week, NBC News reported.

Scroll To See More Images Love is in the air! Can you feel it? Your February 2023 love horoscope will...

Breaking his silence. After crediting her for the reason why he auditioned for Elvis, many fans are wondering: why did...

After releasing her hit album Midnights, Taylor Swift is back at it with another Easter egg-filled music video. But what...