According to an interview with Daily Mail, the anonymous nanny recalled the night that things ended between Jason and Olivia. “On the Monday morning [of] Nov. 9, when I came back from a weekend off, [Jason] was crying a lot, crying and crying. I didn’t know what had happened at all,” the nanny claimed. “After I’d got the kids ready, Jason came upstairs and was having some coffee. He was crying and a mess, saying, ‘She left us. She left us!’” The nanny also alleged that Jason banned the staff from listening to Harry’s music.

Things reached a breaking point when Olivia left the house with a salad with her “special dressing” to give to the “As It Was” singer. “The night she left with her salad, Jason had chased after her, videotaping her in the house,” she recalled. “She was saying: ‘I’m scared of you, Jason, I’m scared of you.’ And he said: ‘If you’re scared of me, why are you leaving your kids with me? So then, Jason went outside and lay under her car so she wouldn’t leave. She got in her car to back up, he lay under her car so she wouldn’t leave.” The nanny continued, “He said he was doing it on purpose to make her late going to see Harry.” It was the last straw for the SNL alum. “Out of everything, he was like, ‘She made her special salad dressing and took it to him.’”

The nanny continued, “She didn’t think Jason made her look that good I guess. Even now with Harry, I really believe she’s feeding off his fame to be relevant. She wasn’t really that great as an actress or director. Jason called her mediocre. It’s kind of like, OK, now she’s in the spotlight and Jason always said she wanted the spotlight.” The nanny further said that “now [Olivia] gets the spotlight because of Harry’s fame,” and that Jason said that Olivia “was very concerned what people would think” about her relationships. 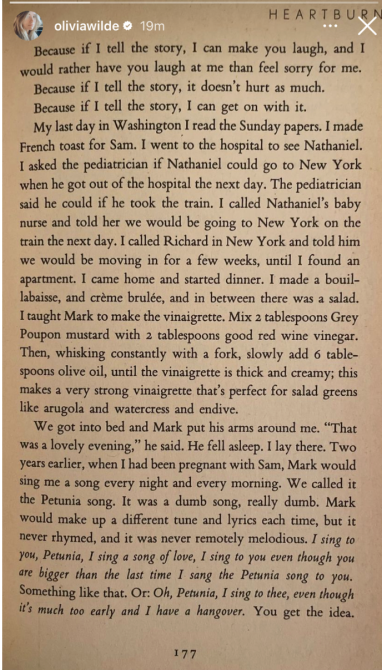 While on stage presenting Don’t Worry Darling in front of 3,000 audience members at CinemaCon in Las Vegas on April 27, 2022, Olivia was interrupted by a woman to give her a manila envelope labeled “Personal and Confidential.” “This is for me?” Olivia questioned, commenting about how the envelope was “very mysterious” before telling the crowd that she was “going to open it now because it feels like it’s a script.” When she opened the envelope and saw they were custody papers from Jason, Olivia put the papers back in the envelope and said, “OK, got it. Thank you.” She continued her presentation on Don’t Worry Darling and didn’t talk about the envelope again.

This Is The Ultimate Warren Buffett Stock, But Should You Buy It?