Must be the season of the Swifties! Before I share which zodiac sign matches each song from Taylor Swift’ Midnights can I ask you a question…? If Taylor Swift isn’t a witch IRL, then why did she debut her 10th studio album Midnights during a Venus cazimi on the eve of Scorpio season? Not that we ever needed a reason to believe that our girl is indeed a mastermind, but I do wanna point out Taylor’s rising sign is sitting right on top of her Mars in Scorpio, which is why she always has the last laugh. In case you haven’t noticed, “she and karma vibe like that.”

If astrology isn’t enough to validate the intensity of her love stories—and the vengeance behind her unfailingly cryptic and strategically written lyrics—Ms. Swift was born with her moon in Cancer, stirring the pot in her 8th house of intimate unions and soul bonds. This makes her emotions all the more intriguing and evocative, because they’re always the source of her next masterpiece. It’s safe to assume that even if she were to forgive the lovers, managers and industry bullies who wronged her in the past, she would still never forget. Comes with the turf when you’re as indestructible as Taylor, but Midnights is proof she’s definitely on her vigilante sh*t again.

By the way, the only thing better than waiting for the clock to strike midnight on October 21 was the fact that an extended album Midnights (3.a.m. Edition)—unbeknownst to us at the time—would be dropping three hours later. Grateful is an understatement, but I digress. 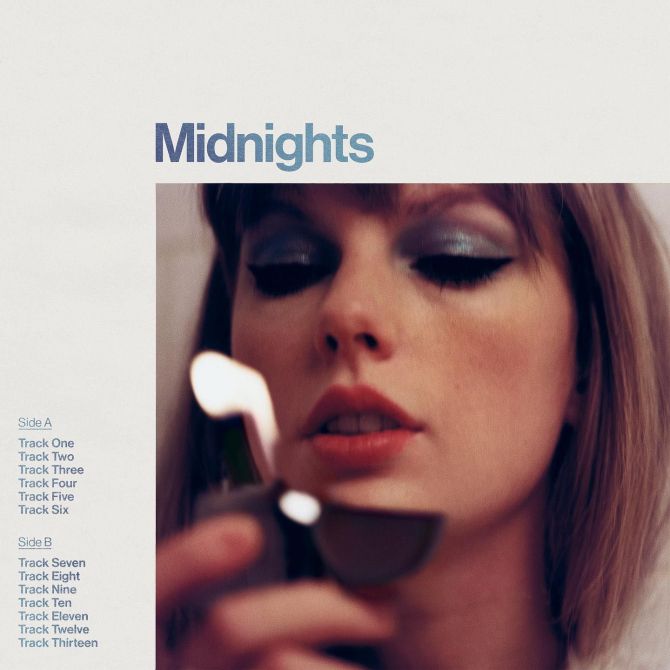 “But diesel is desire, you were playing with fire.” This bittersweet melody paints a warlike backdrop, crimson clover, depicting the “bloodshed” and exhaustion that could come with fighting for a difficult relationship. I know what you’re thinking: did being ruled by fiery Mars—God of war—give it away? Perhaps, but you have to admit, when all is said and done, you blindly go to battle for the ones you love.

The title of this track was inspired by an episode of Madmen, where Taylor felt drawn to the 1950s’ phrase “lavender haze.” Turns out it was used to describe that glow of love that surrounds you, upon falling for someone. In other words, why rush things when you can bask in the sweetness of the lavender haze? You take your time, because you’re a Venusian who prefers to go slow, and indulge in every moment, Taurus.

“Do you wish you could still touch her? It’s just a question.” Thanks to your curious planetary ruler, Mercury, you’re naturally inquisitive, and this couldn’t be more of a fit for the seventh track off Midnights. You’re also a brilliant communicator and an avid thinker, which makes you more prone to going down the rabbit hole of thought. A catchy commentary, this song is both opinionated and relentless for answers. Sound about right, Gemini? 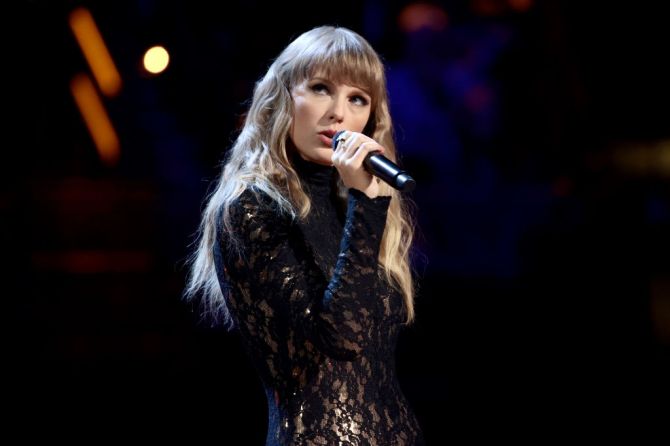 “Outside, they’re push and shoving, you’re in the kitchen humming, all that you ever wanted from me was sweet nothing.” Inspired by the simple yet sacred space shared between Taylor and her boyfriend, these soft-hearted lyrics beautifully encompass the ideal *safe haven* you long for the love department, Cancer. You are often recognized for your empathy and nurturing, but with this being your first instinct, many often fail to realize how much you long for the same in return.

“Draw the cat eye sharp enough to kill a man.” No one can cat-eye like you can but when push comes to shove… you don’t get mad, you get even. Be it with your fierce sunkissed glow, or the fashion game you’re slaying during your night out, you always bring it, Leo. You also have no problem cutting people off when needed, even if that means having to re-record six of your albums to put a record executive in his place. Catch my drift?

“What if I told you I’m a mastermind and now you’re mine.” Just the first chords of this song alone remind me of your methodical mind, and everything in-between… but in this last track, Taylor hints at the success of her persistence and strategy to be with her now-boyfriend, after meeting him at the 2016 Met Gala for the first time. As for you, Virgo? You revel in the process and the details of every situation, and your brilliant powers of observation explain why you’re typically 10 steps ahead of everyone around you. 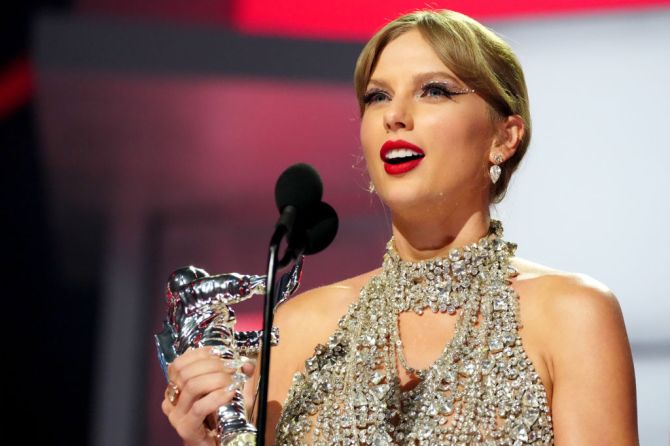 “Sweet like justice, karma is a queen.” This wordy banger has your name on it, Libra. After all, your zodiac archetype represents the scales of balance, justice and harmony, making you an advocate for equality. “Spiderboy, king of thieves, weave your little webs of opacity, my pennies made your crown.” Ruled by Venus, you’re a graceful diplomat because in the end, you believe that what goes around does indeed come right back around.

“I should not be left to my own devices, they come with prices and vices, I end up in crisis.” Despite your tough and intimidating exterior, you are notorious for being your own worst enemy at times, Scorpio. Being ruled by Pluto also makes you more prone to experiencing cycles of death and rebirth, but the way Taylor humbly speaks on her fears and faces her demons beautifully showcases your ability to regenerate, and rise above the darkness.

“He wanted it comfortable, I wanted that pain.” Not saying you can’t hold onto a relationship, Sagittarius, but your mutable fire energy is spontaneous and fiercely driven, making you as inspired as you are restless, which is impossible to tame. Taylor (fellow Sagittatius) sings about how she and someone she dated wanted completely different things. This is where your instinct to explore and desire for freedom would be to blame for you changing like midnight. 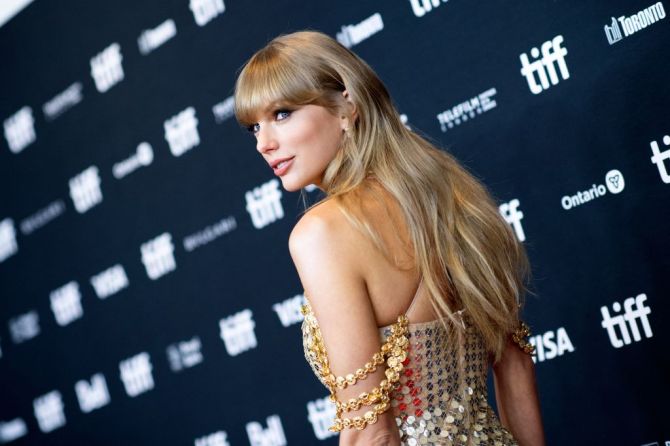 The title speaks for itself but the lyrics “from sprinkler splashes to fireplace ashes, I gave my blood, sweat, and tears for this,” really encapsulates your ruthless perseverance to succeed. The fifth track off Midnights, this song is about a girl who waits for her lover to notice her, while desperately chasing her goals and dreams, which lead to gaining and losing some along the way. It reminds me of your cardinal earth energy, because while your determination is unmatched, it’s important to slow down every once in a while.

“They ask, “Do you have a man?” I could still say, “I don’t remember”.” Everything from the colorful effervescence of this sparkly tune to the lighthearted truth bombs coming from the lyrics perfectly embodies your shimmering presence, Aquarius. “Diamonds in my eyes, I polish up real nice.” Being ruled by galactic Uranus explains why you also stand out in the crown so effortlessly, but Aquarius placements more than often have gleaming diamond eyes. P.S. Taylor’s Venus is in Aquarius!

Similar to the paradox of this title track, your mystique and enigmatic aura can be both beautiful, and haunting, Pisces. “And it’s like snow at the beach, weird but f*cking beautiful, flying in a dream.” The melodic synergy of Taylor and Lana Del Rey also encapsulates the contradiction of your mutable waters, as your emotional waves are both enchanting and perplexing. Taylor also mentioned this song being about the magical serendipity that occurs when two people fall in love with each other at the exact same time, because it feels like a dream.

Opinion: Stock market bulls have a new story to sell you. Don't believe them — they're just in the 'bargaining' stage of grief