Spooked out! Halloween season is in full swing and many celebs came out for the occasion in their best garb. But who rose above all the ghouls and goblins to take the “Best Costume” crown? Here’s a list of some of the best celebrity Halloween costumes of 2022 so far..

Halloween 2021 was the soft launch into the thrilling and spellbinding Halloween comeback we’ve all been waiting for since restrictions lifted. Last year, fans saw Kravis pull off the most iconic punk couples costume where they dressed as Sid Vicious and Nancy Spungen. The OG “Scream Queen” Jamie Lee Curtis paid homage to her legendary mother Janet Leigh when she dressed up as Marion Crane from Alfred Hitchcock’s hit 1960 movie Psycho. Drew Barrymore did an awesome throwback to her character Casey Becker from 1996’s Scream for her hit daytime show. We even saw Hayley Kiyoko dress up as Kang Sae-Byeok (blood and all) from Netflix’s Squid Game. The celebrity Halloween costumes of 2022, however, went above and beyond last year to show off their dolled-up looks that perfectly fit in with the frightening holiday.

Our favorite mom Jennifer Garner went with two very classic Halloween look. In an Instagram video posted on October 28, 2022, the Alias star dressed up as a witch and a ghostly bride. Celebrity makeup artist Fiona Stiles helped her and her dog be glammed up for the occasion. She posted on an earlier video of the costumes, “Three little hostesses, Sitting on possesses, Eating buttered toastesses, Greasing their fistesses, Up to their wristesses. Oh, what beastesses To make such feastesses! #HappyHalloween👻 👻 👻”

Besties! Kylie Jenner posted a TikTok where she and Hailey Bieber went out to get pizza. “Why is everyone staring at us?” she says as they’re both painted green as the Wicked Witch of the West. “I feel like we’re dressed so normal!” Hailey says very sarcastically. She captioned the video as “loves a 3rd wheel” though Justin Bieber wasn’t visibly seen.

The “Kiss Me More” singer was really getting into the spirit as she dressed as a sexy nurse with her pad decked out in Halloween decorations and Halloween films rolling in the background. She also posted several other Halloween themed pictures on her Insta including a photo of her in a jack-o-lantern-themed bra and captioned the post, “HAPPY WHAT??!????? 🗣🗣🗣🗣🗣🗣🗣🗣🗣🎃🎃🎃🎃🎃🎃🎃🎃🎃🎃🎃🎃🎃🎃🎃🎃🎃🎃”

The Talk’s hosts Jerry O’Connell and Natalie Morales went all out in matching costumes as Machine Gun Kelly and Megan Fox. In Jerry’s Instagram videos, he’s getting his edgy nails ready to mimic the Bloody Valentine musician’s style while his co-host was getting ready to match her makeup and outfit like the Jennifer’s Body star. Their outfits will premiere on the Monday episode of the 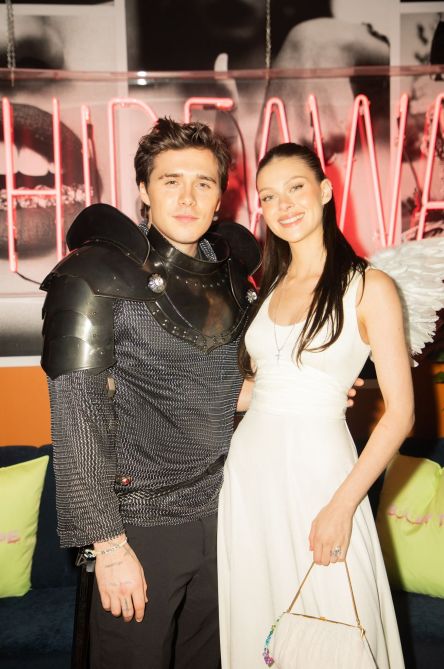 Ashley Graham as an Angel

Heavenly. Ashley Graham dressed up as an angel for the Booby Tape Halloween Party in West Hollywood, California. She paired the angel wings with an iconic dress from Miaou and sang a long chorus note and blessed her fans before she headed to the party.

A cute royal affair. Goldie Hawn and Kurt Russell elegantly matched their granddaughter’s Cinderella costume for a dual Halloween and birthday party. The Academy Award-winning actress captioned her post, “Happy 4th birthday our precious Rani Rose🌹You are the real queen! I’ll take Lady in waiting everyday as long as the prince is always beside me! WE LOVE YOU!!! 💕💕💕💕🎂🎂🎂🎂,” she captioned her Instagram post.

There’s never an earlier time to celebrate Halloween. Once October 1st rolled around, Megan Thee Stallion posted a picture of herself with a pumpkin head to celebrate the season right with a cocktail in her hand.

Sarah Michelle Gellar as a Do Revenge student

Sarah Michelle Gellar wants to be like her co-stars. The Do Revenge actress took to Instagram to dress up like the characters notably played by Camila Mendes and Maya Hawke from the Netflix original film. “Sometimes you have to pretend to be someone else, to get what you want” #countdowntohalloween I told @jennkaytin I was jealous I never got to wear the amazing costumes she designed for the Rosehill uniform… so…. But now the bigger question… am I more an Eleanor or Drea?!? #dorevenge”

Vanessa Hudgens as the White Swan from Black Swan

Vanessa Hudgens and her friend GG Martee went in to dress up as the dainty white swan and black swan from the 2010 psychological thriller film Black Swan. The two struck their best ballerina poses while also having fun with their friends on a fun pre-Halloween night out. In another Instagram post, she dressed up as an old hag with lots of prosthetics while gesturing towards the camera to promote Eli Roth’s Freaky Haunted House VR Experience for Meta.

A spooky ‘NSYNC reunion! Lance Bass and JC Chasez went to Podwell Entertainment’s 11th Annual Halloween Party with some rockstar costumes. Lance explained his complex costume on his Instagram, “So the idea was to be Black Sabbath Panther. Ozzy on top and Black Panther suit on the bottom. Well, right outside the party I completely ripped through the body suit. I’m sure it was because of my bulging muscles and not all the Halloween candy I’ve been eating since Oct 1. Anyways, this is all I got. The intention was pure.”

Don't Beat Yourself Up if You Missed the 9.62% I Bond Yield