Hail the Pumpkin Queen. Heidi Klum’s Halloween costumes through the years proves that she wins Halloween every damn time. For the past-20 years, Klum has been the queen of Halloween for over-the-top costumes, such as Fiona from Shrek, Jessica Rabbit and the werewolf from Michael Jackson’s 1982 music video for “Thriller.”

Armed with hours’ worth of prosthetics, makeup and one-of-a-kind costumes, Klum never ceases to amaze us. (We mean, the woman hosts an annual star-studded Halloween party, so you know she loves the holiday.) In a 2018 interview with The Hollywood Reporter, Klum explained that her love of Halloween stems from her childhood in Cologne, Germany, where she attended the country’s annual Karneval, a famous celebration filled with candy and wild costumes.

“I embrace that title! And I always want to live up to it, year after year,” Klum said at the time of her Halloween Queen title. “When I moved to America, I immediately fell in love with Halloween and the spookiness of it. All that was missing was a fantastic party. It felt like a real opportunity for me.”

So how does she pull off her Halloween costumes each year? Well, Klum told THR that she starts thinking of next year’s costume the day after Halloween. “I start thinking about it on Nov. 1! I usually have two or three ideas that I’m playing with and then I decide on one thing. You have to decide at one point because pieces have to be built and all of that,” she said. “So right when the party is over, the morning of Nov. 1, I start thinking, ‘Maybe next year, I’m going to do that one that I didn’t do this year.’ And then, obviously, throughout the year new things come into my mind because maybe I’ve seen a movie, or I went to a country and was inspired by something I saw there.” Look back on Heidi Klum’s Halloween costumes through the years ahead.

A version of this article was originally published in 2016.

For Heidi Klum’s Halloween costume in 2021, she forwent her annual Halloween party again and filmed an original horror short film, where she paid tribute to several iconic horror films, including Psycho. The short film also saw her play several monsters, including a dead version of herself the emerges from her grave and a flesh-eating cannibal.

Because Halloween was cancelled in 2020, Klum directed her own #HeidiHalloween2020 film, in which she was haunted by monsters in her house played by herself. “Halloween is different this year, but that shouldn’t stop us from getting creative at home 👻 Be safe, be spooky, and spend time with family. 🎃🕸🦇🧛🏻‍♀️🧟‍♀️ #HeidiHalloween2020,” she captioned the five-minute movie on her Instagram. 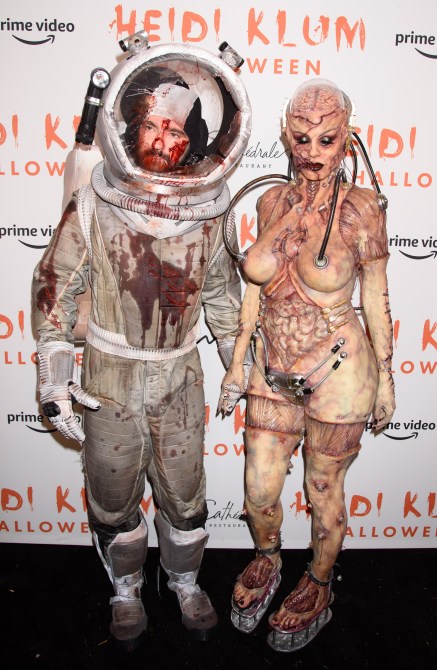 For Heidi Klum’s 2019 Halloween costume, she and her husband, Tom Kaulitz, dressed as an out-of-this-world duo. Klum dressed as a near-naked, flesh-eating alien, while her husband was the bloody astronaut who had just been feasted on. Klum’s costume took 10 hours of prosthetics and makeup. She live-streamed the process of her Halloween costume on Amazon.

Heidi Klum took a page out of Katy Perry’s book for her second 2019 Halloween costume and dressed as a firework. The look consisted of tons of silver glitter. Her husband, Tom Kaulitz, accompanied her metallic look with a face covered in silver glitter. 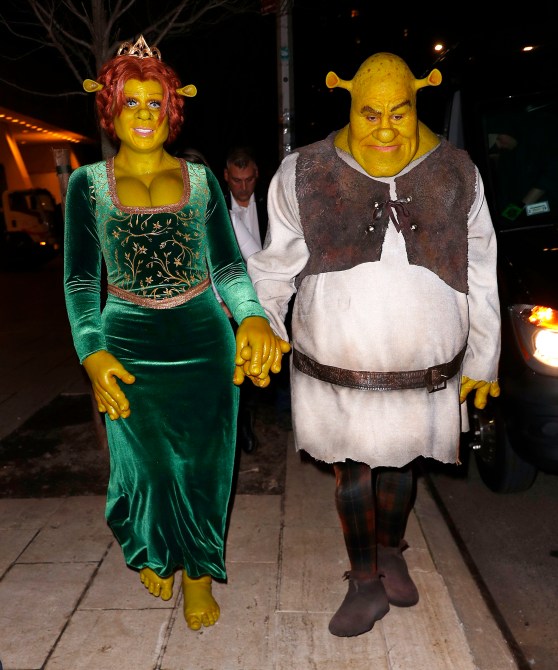 For Heidi Klum’s 2018 Halloween costume, she and her husband, Tom Kaulitz, dressed as the main couple from the 2001 movie Shrek. Kaulitz was the titular character, while Klum dressed as Princess Fiona. Their looks, of course, were complete with green prosthetics for an authentic ogre look. 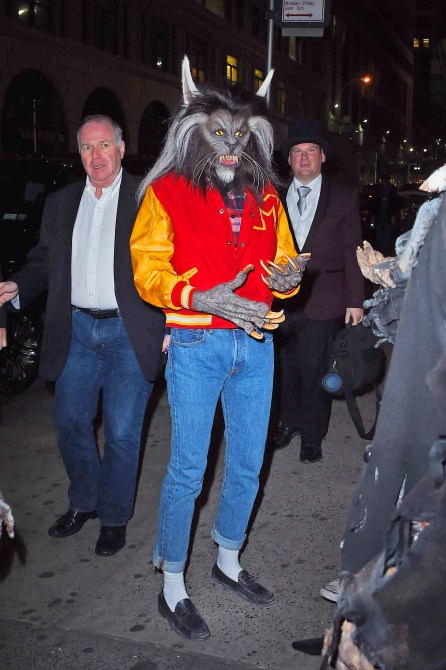 Heidi Klum’s 2017 Halloween costume was the werewolf in the music video from Michael Jackson’s 1982 song “Thriller.” The look consisted of a red-and-yellow letterman jacket, blue jeans and, of course, a werewolf mask and prosthetics that look identical to the monster in Jackson’s video. Klum accompanied her costume with a mini-performance of Jackson’s choreography in New York City. 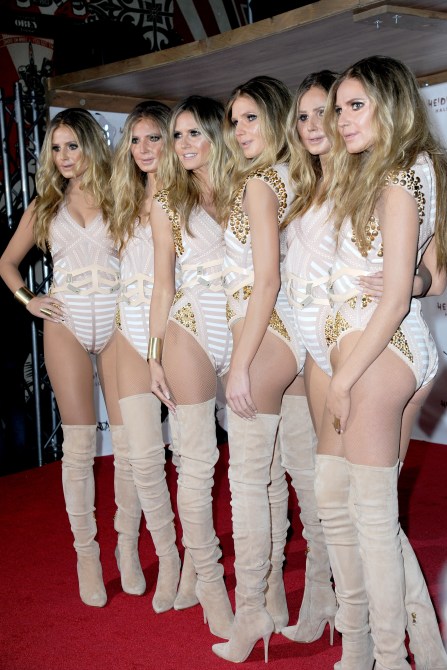 On her own, Heidi Klum’s 2016 Halloween costume isn’t that impressive. But with five clones of herself, the model won the holiday. For 2016, Kluim recruited five models that looked like her for a trippy Halloween costume. Each model, wore the same knee-high boots and leotards. Klum’s “clones,” of course, also had prosthetics to look even more identical to the model. 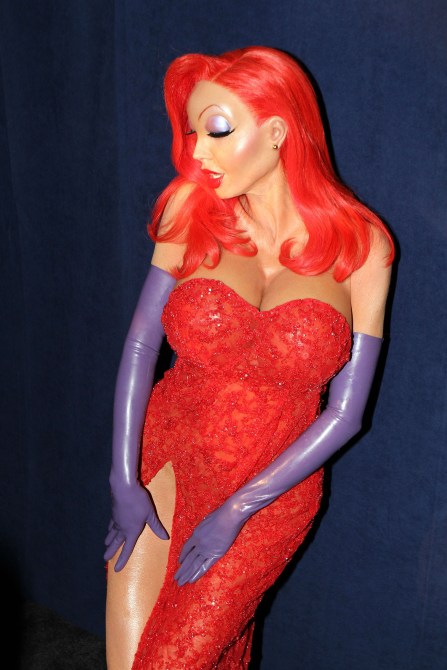 Heidi Klum’s 2015 Halloween costume as Jessica Rabbit is one of her best. Klum looked almost identical to the cartoon character from 1988’s Who Framed Roger Rabbit in a red curves-hugging dress, blue latex gloves and tons of prosthetics to mimic Jessica Rabbit’s unnatural proportions. 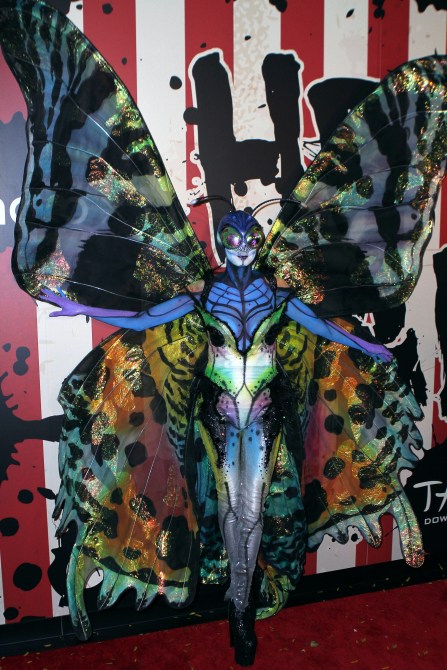 For Heidi Klum’s 2014 Halloween costume, the model dressed as a butterfly with massive wings. She also painted her body in shades of blue and white to mimic the dazzling colors of a butterfly. 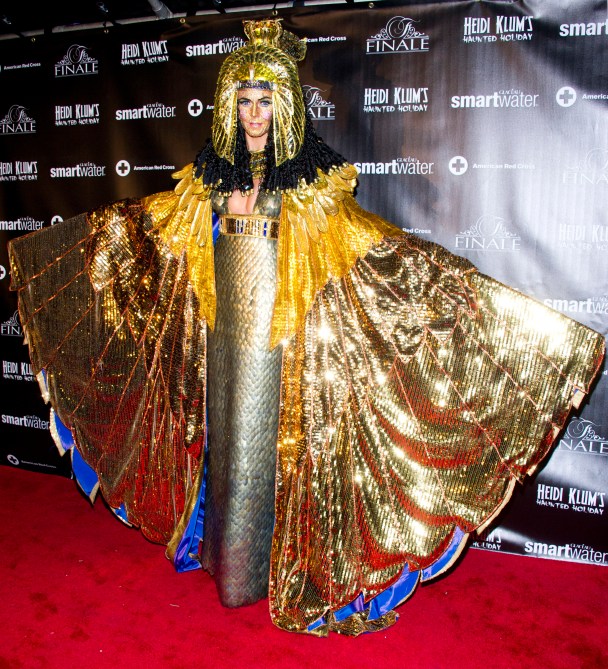 Heidi Klum’s 2012 Halloween costume was Cleopatra. The model walked down the red carpet of her Halloween party dressed head to toe in gold—including a royal headpiece. 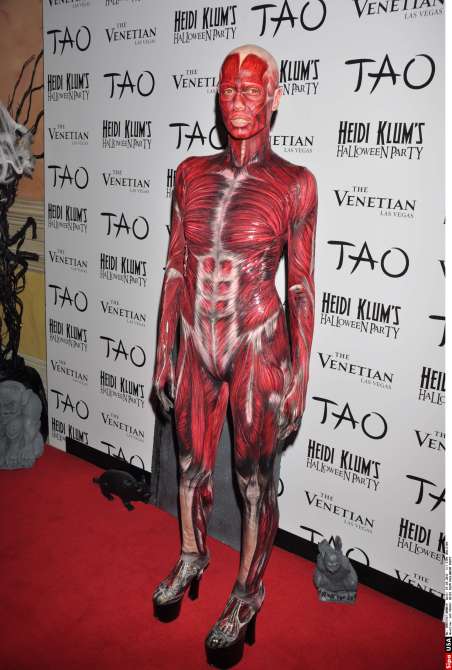 Heidi Klum’s 2011 Halloween costume was a human body—but not just any human body. Klum dressed as a human body without hair or any skin. On the red carpet at her Halloween party, Klum also laid down on an operating table as fake doctors assessed her. 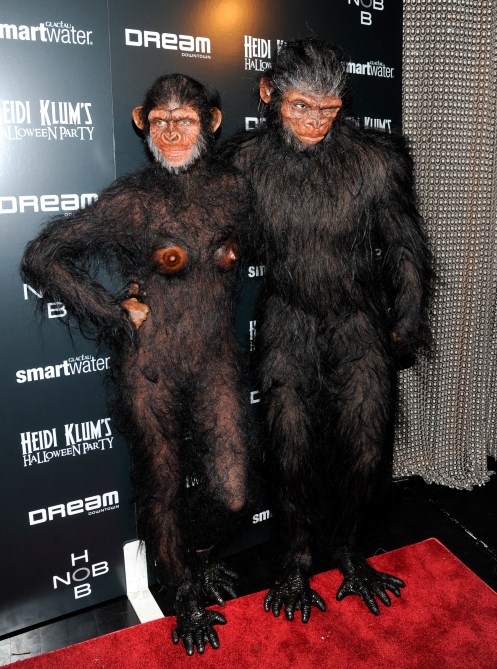 Also for Heidi Klum’s 2011 Halloween costume, the model and her husband at the time, Seal, dressed as apes. The costumes were almost identical except Klum’s had obvious nipples showing. 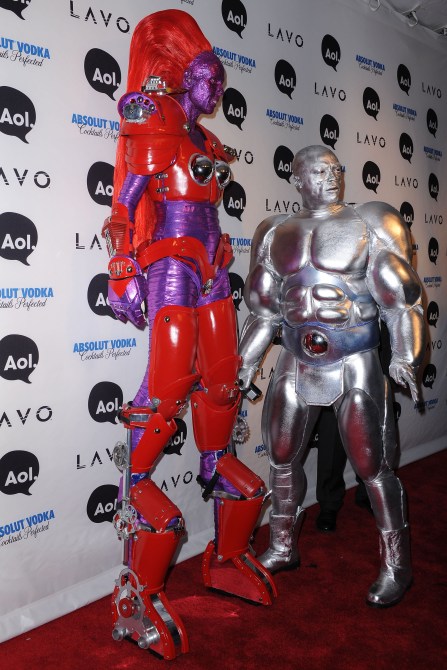 For Heidi Klum’s 2010 Halloween costume, the model wore stilts and dressed as a sky-high red and purple robot. Next to her was her husband, Seal, who dressed as a much-shorter silver bot. 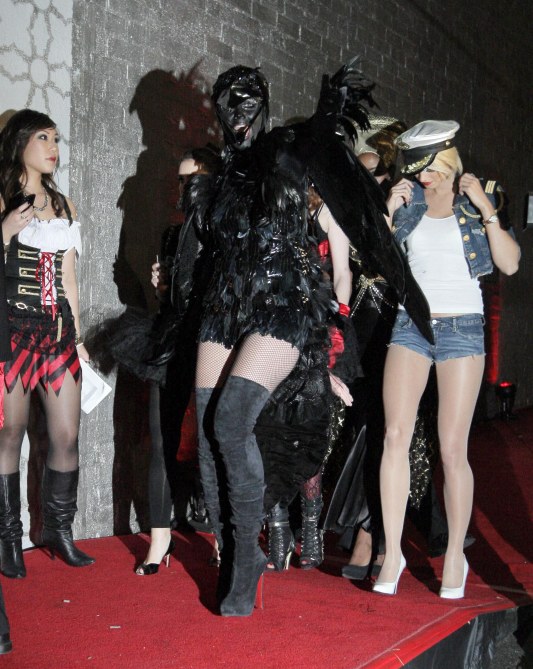 The model is known for her legs, so it came as no surprise that Heidi Klum’s 2009 Halloween costume was a sexy crow. On top, Klum was a crow, complete with black wings and a beak. On the bottom, the model showed off her best assets: her legs in knee-high boots. 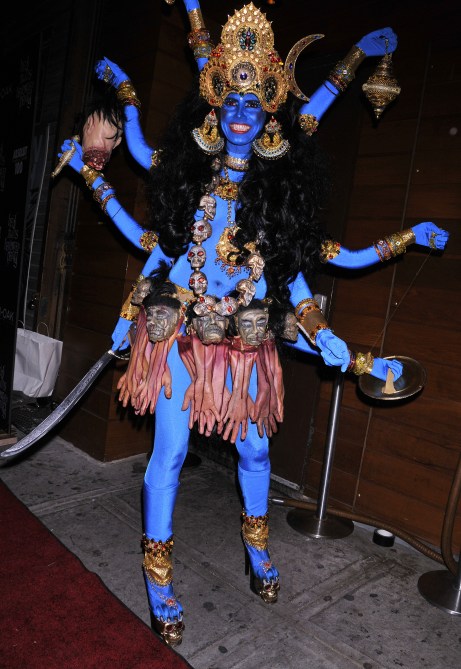 One of her problematic costumes, Heidi Klum’s 2008 Halloween costume was Kali, the Hindu goddess of death and time (or at least her interpretation of the goddess). The look consisted of a blue multi-armed costume and swords. 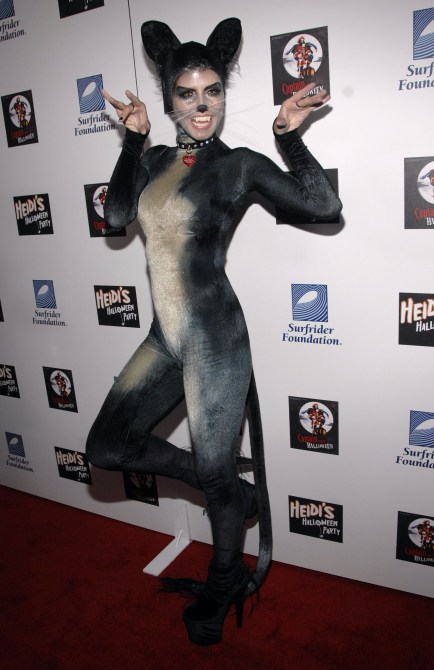 Heidi Klum’s 2007 Halloween costume was anything but basic. The model looked straight out of the Cats Broadway musical in this authentic furry costume. 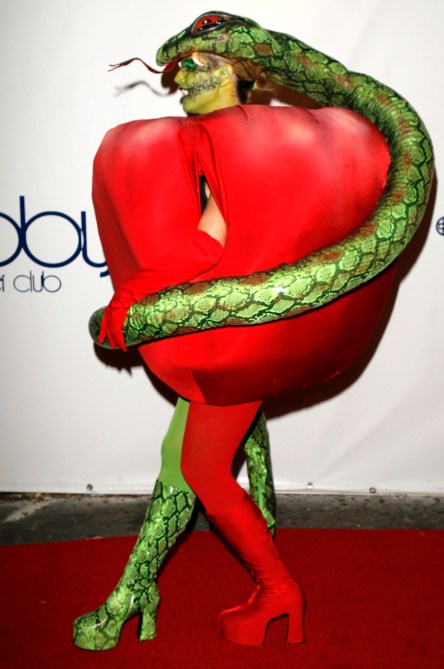 For Heidi Klum’s 2006 Halloween costume, the model channeled the Bible story about Eve and the Forbidden Fruit. She dressed as both the fruit and the snake. Her husband at the time, Seal, was Eve. 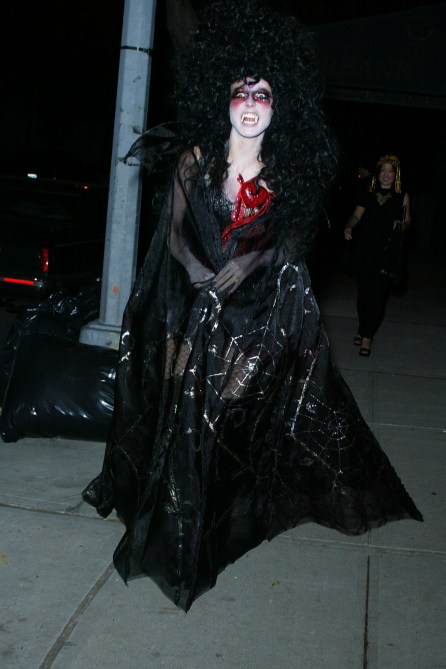 Sure, vampires are common around Halloween, but Heidi Klum’s 2005 Halloween costume was one of the better bloodsuckers we’ve seen. 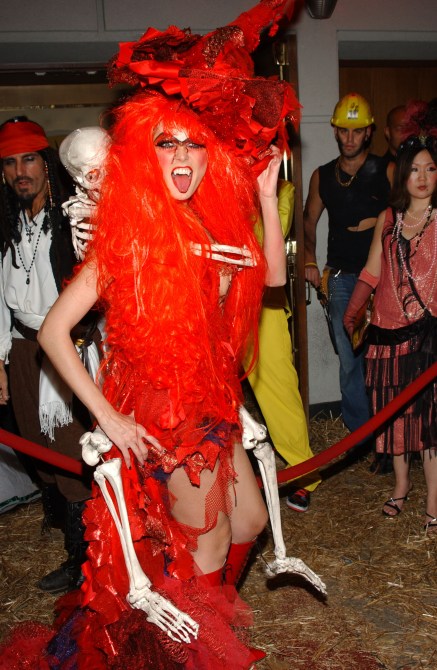 Heidi Klum’s 2004 costume wasn’t your average witch. The model accompanied her outfit with bones, a bright red wigs and a broomstick. 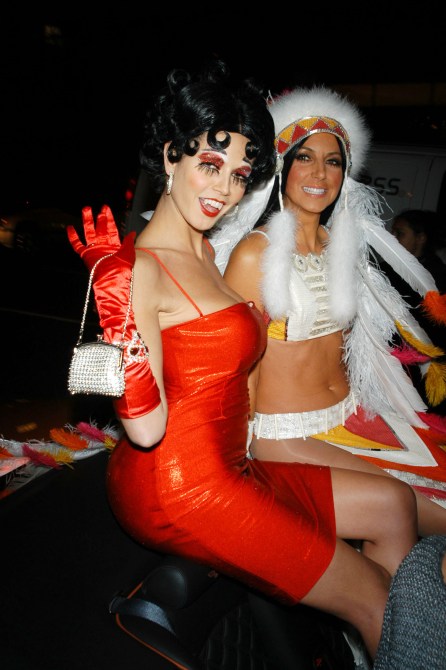 Heidi Klum’s 2002 Halloween costume as Betty Boop will go down in Halloween history. From the eyelashes to the curls, she nailed this look. Of course, she had to add her own Halloween flair with vampire fangs. 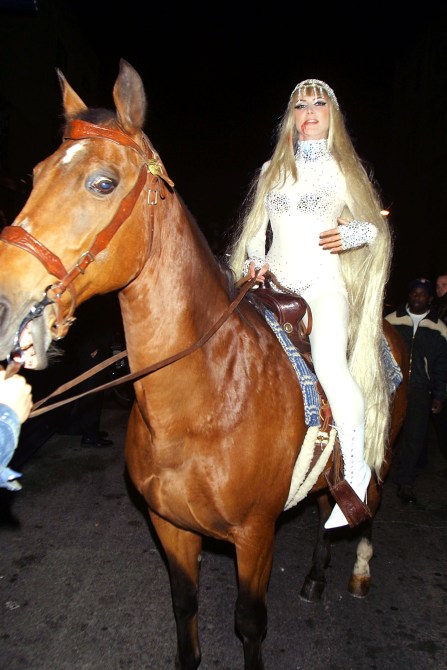 For Heidi Klum’s 2001 Halloween costume, the model rode into a Halloween party on a horse as Lady Godiva. Her look was complete with a down-to-the-floor-long wig and an ethereal headpiece.

3 REITs To Check Out For Solid Dividends And Growth