If you’ve started the new season, you may be wondering where The White Lotus season 2 filmed and if the second season was actually shot in Sicily.

The White Lotus is an anthology series that follows guests and employees at the fictional White Lotus resort chain. Season 1, which premiered in July 2021, was set in Hawaii, while season 2, which premiered in October 2022, was set in Sicily. In an interview with The New Yorker in July 2021, The White Lotus creator Mike White explained that the show was inspired by his own childhood and his family’s vacations to destinations like Hawaii. “When I was little, I would go to Hawaii with my family. My dad was a minister, so we didn’t have a lot of money. It was my first experience of being somewhere other than where I lived,” he said. “The Hawaiian culture is very specific, and there’s something very magnetic and beautiful about it. After I made Enlightened, I actually was able to buy a place there. I was hoping to be Paul Theroux and have my Hawaiian writer’s retreat or something. And it is such a paradisiacal, idyllic place.” He continued, “But it’s also such a living microcosm of so many of the cultural reckonings that are happening right now. There are ethical aspects to just vacationing there, let alone buying a house there. The longer I spent time there, the more I realized just how complex it is. And it just felt like that might be interesting as a backdrop to this show.”

Since its premiere, The White Lotus has been well-received by critics for its “sharp social satire” of The White Lotus chain’s predominantly white guests and their interactions with the resort’s staff. White told The New Yorker that the show’s characters are based on tourists he’s met while on vacation. He also revealed that season 1’s storyline about natives being displaced by corporations like the fictional White Lotus resorts is also based on what he’s seen first-hand in the state. “I have a place in Hanalei, and there’s all these tech bros. The tech world has found Hanalei. So there’s these huge houses—not my house—that are being sold for thirty million right on the beach. Mark Zuckerberg has a place there,” he said. “And I’d be, like, Ugh, those guys. They own the world! And then I was, like, I am that guy. The people who live there [in Hanalei] and have lived there their whole lives, they’re all being displaced.” He continued, “And it’s a small enough place that you can kind of hold it all in your head in a way that you can’t in a place like L.A. It’s a complex place, and I didn’t feel like I could tell the story of the native Hawaiians and their struggles to fight some of their battles, but I felt like I could kind of come at it from the way I experienced it. At first, it’s, like, It’s so beautiful! I’m in touch with nature and it’s so healing. Then you realize it’s on the backs of people who’ve had a complicated history with people like me.”

Where was The White Lotus season 2 filmed? 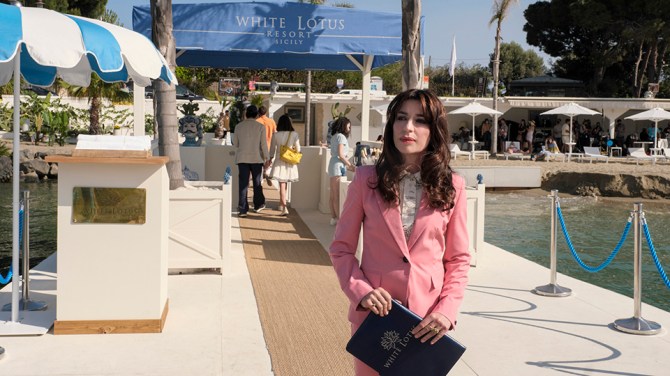 Along with the Four Seasons San Domenico Palace, scenes in The White Lotus season 2 were also filmed at Lumina Studios in Rome, as well as locations in Sicily like The Noto Cathedral in the southeast of the island. Elite Daily also reported that scenes were filmed at the restaurant  La Cambusa on Giardini Naxos beach in Naxos, Sicily. Scenes were also filmed in Palermo, the capital city of Sicily.

In an interview with Newsweek, Aubrey Plaza, who plays Harper Spiller in The White Lotus season 2, explained how Sicily, where the second season is set, differed from the first season, which was set in Hawaii. “I think the environment is very much a part of the show. It’s like a character, the location. So I think the show is very informed by the energy of kind of being on this volcanic Italian island and I think the show is more focused on sexual politics rather than cold, colonialism, and, in my opinion, the money and those kinds of issues that the first season dealt with. So I think that’s it, there’s a slight shift in kind of focus,” Plaza said. “There is a lot about relationships and cheating, jealousy, sex, like, things like that.”

Jennifer Coolidge, who plays Tanya McQuoid-Hunt, also told Newsweek that the real-life location for The White Lotus season 2 almost “doesn’t look real” on screen. “It was better than what it looks like on screen. I mean, I know that’s impossible to believe if you haven’t been to Sicily, but it really doesn’t look real. Those backdrops of the sea and those giant stone sort of formations that come out of the sea, it just doesn’t look real,” she said. Jon Cries, who plays Greg Hunt, added: “It was absolutely breathtaking. The interesting thing some of the scenes that we filmed it was rather cold because we got there in February and but it’s still it’s just stunning. It’s stunning, even when you’re sitting out there shivering.”

Where was The White Lotus season 1 filmed? 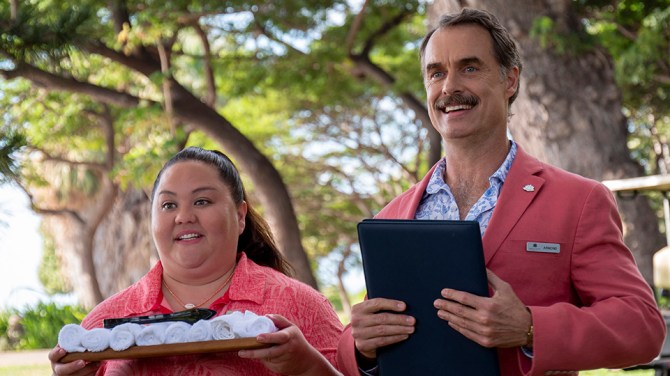 The Four Seasons Resort Maui is located in Wailea, an area in south Maui that’s also home to other luxury resorts like the Grand Wailea, the Andaz Maui at Wailea Resort, and the Wailea Beach Resort – Marriott, Maui. Fans of the show can also book a stay at the resort, though it will cost you. Rooms for two at the resort average more than $1,000 per night. As for amenities, the Four Seasons Resort Maui has three pools (including an adult-only pool named the “Serenity Pool”), 81 beach cabanas, kayak tours, surfing lessons and scooter snorkeling. The resort also includes a spa (with a carnialsacral treatment as seen in the TV show), as well as three restaurants, including Wolfgang Puck’s Spago.

If you do stay at the Four Seasons Resort Maui, however, don’t expect it to look like the White Lotus. In an interview with Variety, The White Lotus‘ set designer, Laura Fox, explained that the White Lotus was designed to look more tropical than the Four Seasons Resort Maui. She also revealed that each of the rooms in the show was designed to reflect each character’s personality, such as Tanya’s pink room. Because she couldn’t pain the rooms, Fox changed the looks of the room by adding details like new curtains, artwork and bed headboards. She also changed the furniture, like the red velvet chairs in Tanya’s room. Fox also changed the spa to make it more suited for TV. The spa existed, but again, we emptied everything because we wanted it to be cinema-oriented. We just wanted to tie it to everything else that we were doing,” she said.

August 2021, news broke that The White Lotus had been renewed by HBO for a second season that will be set at a different resort not in Hawaii and follow “a different group of vacationers as they jet to another White Lotus property and settle in temporarily amongst its inhabitants.” In an interview with Indiewire, White hinted that season 2 could be set in Saint-Tropez, France, instead of Hawaii. “We have had discussions, but it remains unresolved. It would have to be a different hotel, like, say, The White Lotus: Saint-Tropez or something,” he said.

The White Lotus is available to stream on HBO Max. Here’s how to watch it for free.

Keep on Buying These 3 Chip Stocks Ahead of Earnings, Says Analyst