What Happened to Josh Guimond? ‘Unsolved Mysteries’ Theories, Where Is He Now?

On November 9, 2002, Josh Guimond left a party at a friend’s house on campus at around 11.45 pm but he never made it home. Josh disappeared without a trace and, 20 years later, his friends and family are still wondering what happened to Josh Guimond. The Minnesotan’s disappearance is the subject of Netflix’s third season of Unsolved Mysteries, with deep dives into theories and interviews with those working on his case to figure out what happened.

“Our hope is attention will be brought to this case to generate tips or information that is needed to solve this case,” lead investigator Lt. Zach Sorenson with the Stearns County Sheriff’s Office, told local news station FOX 9 on October 27, 2022. “Our thoughts are with Joshua Guimond’s family, friends, the St. Johns and St. Bens family, and the community. The Stearns County Sheriff’s Office is committed to obtaining answers regarding the disappearance of Joshua Guimond. It is our belief that directly engaging the community in this effort is key.” Read on to find out all we know about what happened to Josh Guimond and his disappearance.

What happened to Josh Guimond?

What happened to Josh Guimond? Detectives and his family are stumped. In 2002, the 20-year-old was a student at St. Johns University in Stearns County. He was studying alongside his girlfriend at the time, Katie Benson, though the couple had been broken up for a few months before he vanished.

On November 9, Josh attended a party held at a friend’s home on campus. Guests at the party observed Josh get up, which they presumed to be to go to the bathroom down the hall, but that was the last time he was seen. Interestingly, he didn’t have his wallet, car keys or glasses on him when he disappeared somewhere during the three-minute walk back to his dorm. When he failed to show up for a mock trial debate the following afternoon, friends realized something was wrong and reported his absence to college security. Police, scent dogs and the National Guard were called in to thoroughly search the campus, which is set amid some 2,500 acres of varied terrain. Bloodhounds tracked his scent for part of the way home, but the trail went cold.

The campus is surrounded by two bodies of water: Lake Stumpf and Lake Sagatagan, leading investigators to originally theorize he had drowned. Despite several searches, however, his body was never recovered. “Recovering a body in any body of water isn’t as easy as you might think, particularly the lakes around Minnesota because the water isn’t that clear,” Lt. Vic Weiss of the Stearns County Sherriff’s Office said in a piece of additional footage shared by Netflix’s own publication, Tudum, suggesting that Josh’s body might still be at the bottom of one of the lakes. One theory is that Josh chose to disengage from his current existence and set up life somewhere else under a different identity. But those close to him don’t buy it. 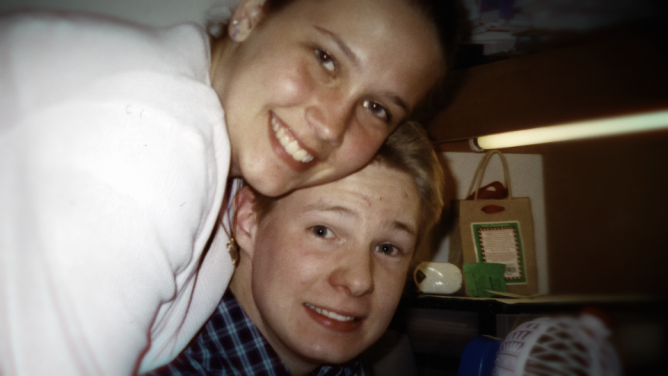 “The most frustrating theory was that Josh just disappeared of his own free will, that he chose to disappear and kind of, take a pause from life because his friends and I, we knew that’s not what happened,” his long-time friend Katie Benson told Unsolved Mysteries. “Josh was not suicidal, he was always talking about the future and what he was going to do next,” another of Josh’s friends, Nick Hydukovich, told the show, with both noting that his plan was to go to law school after he finished college. The theory is that Josh was abducted. The FBI soon became involved in examining Josh’s disappearance as two other men around Josh’s age had gone missing in Minnesota and Wisconsin within 10 days and 170 miles of each other. Host of the podcast Simply Vanished Josh Newville told MPR News: “There were a series of attacks, and stalkings, attempted abductions of college men in the area, not just in November of 2002, the same month that Josh went missing, but, really, in the years surrounding that as well. And so we are continuing to receive leads related to this theory.”

Christopher Jenkins, 21, a student at the University of Minnesota; and Michael J. Noll, 22, a student at the University of Wisconsin-Eau Claire and Josh had all disappeared after leaving parties late at night. A fourth, 21-year-old woman Erika Marie Dalquist, had also disappeared. “What’s unusual about this,” Sheriff Jim Kostreba of Stearns County told the New York Times at the time, “is that we have four young people missing within a relatively small area. They’re all about the same age, and they all disappeared at night.”

Paul Cheney, Josh’s uncle, said he saw similarities in the disappearances of the three young men particularly. “Josh and Chris Jenkins look a lot alike,” he told the New York Times at the time. “The three boys have the same build, same height, same coloring. Josh is about 5 feet 10, 170 pounds, with an athletic build. All were well-known on campus, outgoing, bright kids with good grade point averages.” Since then, however, authorities concluded that the three disappearances were not connected, as the bodies of Christopher and Michael were eventually found. 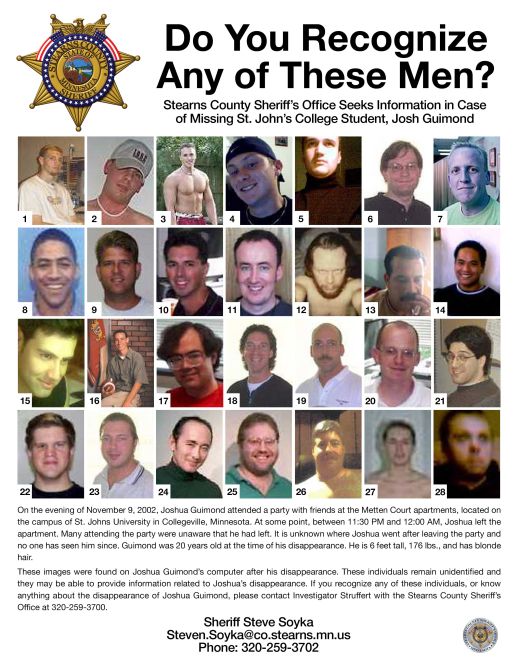 What was on Josh Guimond’s computer?

What was on Josh Guimond’s computer? Investigators believe it’s an important piece of the puzzle. They managed to go through his personal Yahoo account on the PC in his college bedroom, to which Lt. Weiss observed: “The examination of Joshua’s computer leads me to believe he might have had some secrets he didn’t want to share with people.” Chat room data between men and women, as well as the pictures of 28 men were found on his hard drive. Police hope that by making these photos public, someone out there will know something. Anyone who recognizes these individuals or has information about Guimond’s disappearance is asked to call 320-259-3700 or submit a tip here. 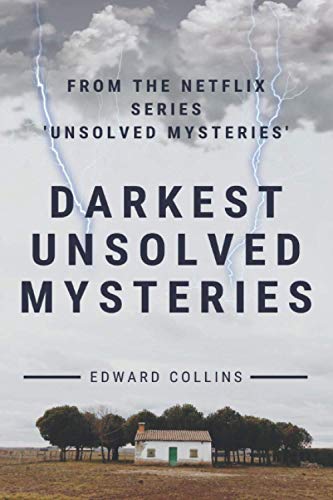 What is it about unsolved mysteries that are so alluring, so chilling? We are fascinated by the unexplained, filled with a sort of weird hope that we might the ones to crack the case ourselves. This book, inspired by the Netflix series Unsolved Mysteries, presents these intriguing cases in a written format. Explore the perplexing cases, shocking murders and paranormal encounters in this gripping book.

Lumen stock falls after dividend is eliminated, but is there a silver lining?