Amber Heard, Elon Musk Relationship: Did He Delete Her Twitter?

A week after Elon Musk purchased Twitter, the account owned by Amber Heard, his ex-girlfriend, vanished. We’re not sure whether she deactivated it herself or whether it’s something of his doing, but many people are wondering what happened during Amber Heard and Elon Musk’s relationship that might cause some spiteful behavior?

On October 28, 2022, Elon Musk bought Twitter at his original offer price of $54.20 a share, at a total cost of roughly $44 billion. The Tesla CEO has been in the process of buying the site since April 2022. In a filing with the Securities and Exchange Commission, Musk said, “I invested in Twitter as I believe in its potential to be the platform for free speech around the globe, and I believe free speech is a societal imperative for a functioning democracy. Twitter needs to be transformed as a private company.”

A week after the buyout, Heard’s Twitter account appeared to be deactivated. The screen, as of November 4, 2022, reads “This account doesn’t exist.” However, Heard’s Instagram still does, though it hasn’t been used in a while. Her last Instagram post was a statement after Johnny Depp’s defamation trial in June 2022. The big question is: Did Amber Heard delete her Twitter because of Elon Musk? Read below to see what Amber Heard and Elon Musk’s relationship was like.

When did Amber Heard and Elon Musk date?

When did Amber Heard and Elon Musk date? Heard and Musk started dating in 2016. The two met on the set of Machete Kills in 2013 where Heard played “Miss San Antonio” Bianca Vasquez and Musk made a cameo as himself. The two started dating after Amber filed for divorce from Johnny Depp, to whom she was married for 15 months. The couple had their first outing at the Delano South Beach hotel in Miami Beach in July 2016.

Amber confirmed the relationship by going Instagram official in April 2017. Heard posted a picture of her and Musk while he sported a lipstick kiss mark on his cheek. In a since-deleted Instagram post, Elon posted a similar picture of the couple at a wine bar in Australia where Heard was filming Aquaman. The two called it quits later that year, reunited briefly in 2018, then called it off for good shortly after.

Why did Amber Heard and Elon Musk break up?

Why did Amber Heard and Elon Musk break up?  A source told People at the time that their first breakup was due to their “busy” schedules. “They had fun for a few months, but are both very busy with work now. It was getting hard to find time to see each other,” the insider said, adding that Musk was the one who initiated the split. “Elon is working day and night. This is his life and he loves it. He is in no position to be in a relationship right now and ended it.”

In an interview with Rolling Stone later in 2017, Elon talked about how the relationship with Heard affected his dating life. “I just broke up with my girlfriend. I was really in love, and it hurt bad. Well, she broke up with me more than I broke up with her, I think.” Right after, he asks if there was anyone he could be set up with. “Is there anybody you think I should date? It’s so hard for me to even meet people,” he added. “I’m looking for a long-term relationship. I’m not looking for a one-night stand. I’m looking for a serious companion or soulmate, that kind of thing.”

The two reunited in 2018, however they called it off for good in a joint statement to Us Weekly. “We would like to speak for ourselves. The distance has been really tough on our relationship because we haven’t been able to see each other much. All relationships have their ups and downs, of course,” the former couple said. “All relationships have their ups and downs, of course. People occasionally send out speculation, which has no basis in fact, without our knowledge, believing that they have our best interests in mind,” Heard and Musk said at the time. “Sometimes, other agendas are at work. It can get a little weird… However, we would like to state directly that we have the utmost respect for one another, and it would be troubling if anyone had the impression that we thought otherwise.”

Reflecting on her relationship with Musk, Heard told The Hollywood Reporter in December 2018, “Elon and I had a beautiful relationship, and we have a beautiful friendship now, one that was based on our core values. Intellectual curiosity, ideas and conversation, a shared love for science. We just bonded on a lot of things that speak to who I am on the inside. I have so much respect for him.” 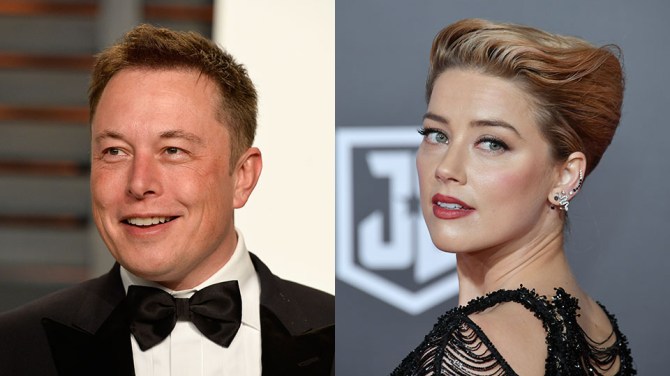 Did Elon Musk delete Amber Heard’s Twitter? There is no confirmation on why Heard’s Twitter was deleted. The Zombieland actress created her Twitter account in 2017 and announced her presence on the site through her official Facebook page. During Johnny Depp’s defamation trial against Heard, Musk tweeted about his ex-girlfriend and Depp. “I hope they both move on. At their best, they are each incredible,” Musk replied to a Twitter user who listed their takeaways from Heard and Depp’s trial.

In one of the trial’s hearings, Depp’s ex-agent Christian Carino revealed texts from Heard about the aftermath of the breakup. “I hate that yet again a man let’s me fall on the spikes by myself. … Meaning, they are mad at me for leaving them and put things like this out there.” Carino then replied, “You could avoid all this if you stopped dating über-famous people. You can be with a big man who isn’t famous.”

Depp won the highly publicized defamation trial on June 1, 2022, after he sued Heard for $50 million. The trial was held due to an op-ed Heard wrote in The Washington Post in 2018 about her experiences with domestic abuse. No names were mentioned in the op-ed although many people speculated that the article was about her marriage to Depp. Depp claimed that the op-ed cost him most of his acting jobs. Depp was awarded $15 million in damages, but Heard was ordered to pay $10.35 million due to a Virginia law cap on punitive damages. Amber was also awarded $2 million after she won one count of her countersuit.

If you or someone you know is experiencing domestic violence, help is available. Call the National Domestic Violence Hotline at 800-799-SAFE (7233) for confidential support.

Why Apple's Stock Is Beating Microsoft, Alphabet, and Amazon